New for 2022, this small group tour on the Trans-Siberian travels from Moscow to Vladivostok stopping off en route in Yekaterinburg, Irkutsk and Ulan Ude.

Plenty of tours and excursions have been included to make the most of the time spent in the cities along the way. Enjoy cooking classes and vodka tasting in Moscow, stand on the border between Europe and Asia, taste delicious omul fish caught in Lake Baikal, marvel at the largest Lenin head in the world and admire the magnificent Siberian tiger. 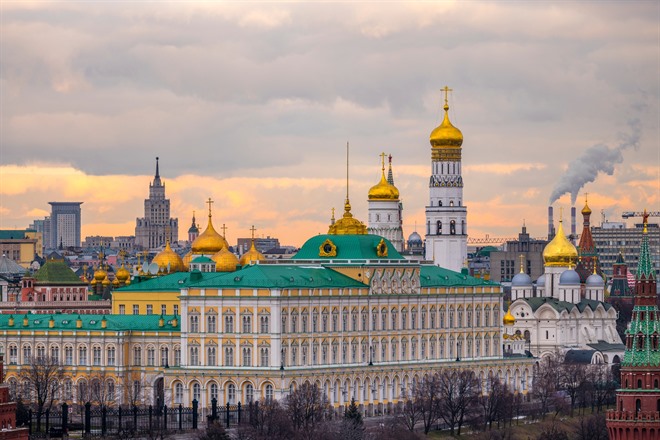 Fly to Moscow, transfer to Courtyard by Marriott Moscow Paveletskaya or similar. Enjoy a welcome dinner at the hotel. (D) 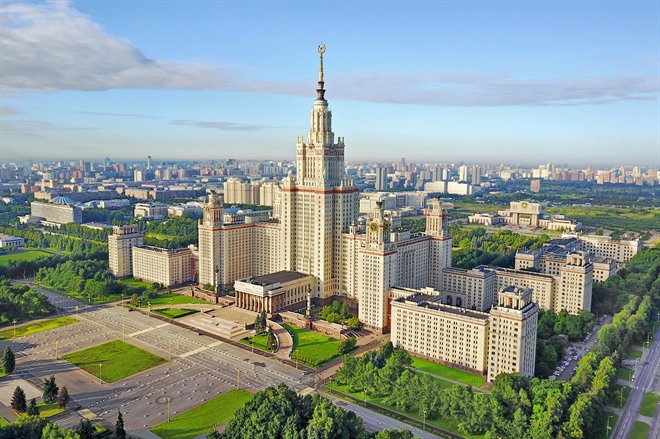 This morning explore the mighty metropolis of Moscow with your local guide. See the impressive Church of Christ the Saviour, Theatre Square and the famous Bolshoi Theatre. Travel along some of Moscow's impressive boulevards to the Moscow State University Campus. Stop at its panorama platform on Vorobiovy (Sparrow) Hills for impressive views of Moscow’s skyline. Visit Red Square where you can admire the colourful domes of St Basil’s, the red-bricked Russian History Museum and grandeur of GUM shopping arcade.

After lunch explore the heart of Russia - the Kremlin. The official residence of the President of the Russian Federation is itself a UNESCO World Heritage site. During this excursion visit Cathedral Square, Ivan the Great Bell Tower and several of its grand churches; the Assumption Cathedral (where Russian emperors were crowned), the Archangel Cathedral (home to the tombs of the grand dukes) and the Annunciation Cathedral. Late afternoon and evening enjoy a Russian cookery experience, with some vodka tasting thrown in for good measure! (B,L,D) 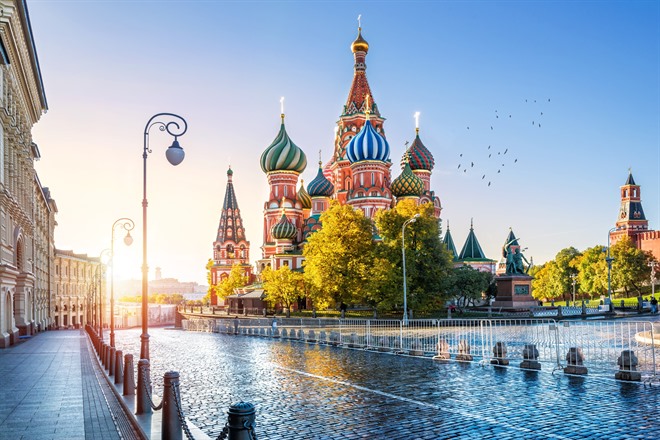 This morning visit the Gulag Museum, a relativity new museum which opened in 2015, that illustrates the history of the Gulags during Stalin’s time - a particularly dark period of Soviet history. Enjoy some free time in Depo Foodhall located in an old tram depot not far from Belorussky Train Station. This contemporary food market has over 200 stalls, shops and restaurants serving food, sweets and drink from all over the world. So, fill up and stock up before the transfer to Yaroslavsky Railway Station, where you will board the train to Yekaterinburg departing mid afternoon. (B)

DAY 4
ON TRAIN TO YEKATERINBURG 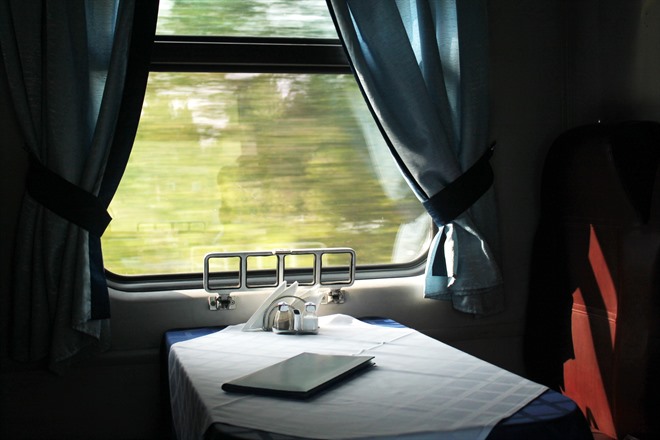 Today is spent on the train passing through villages and towns such as Glazov in the Republic of Udmurtia. Evening arrival in Yekaterinburg and transfer to Yekaterinburg Novotel or similar. 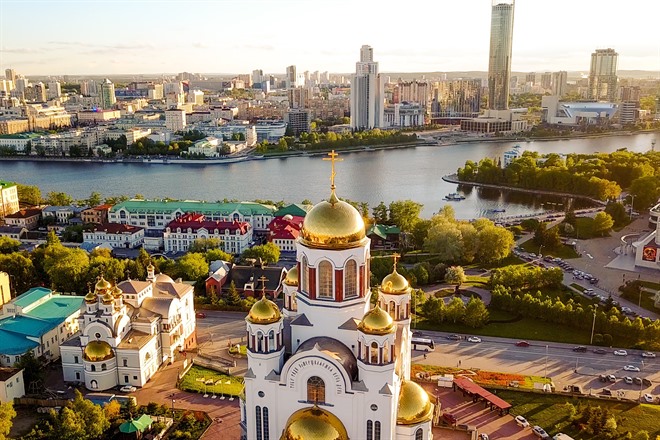 Today enjoy a morning tour of Yekaterinburg with your local guide. Listen to local stories and legends as you travel along its central streets gazing upon Soviet-era constructivist architecture such as the Central Post Office. See statues of Yekaterinburg’s founders and communist leaders. Visit the impressive Church of Spilled Blood built on the site where the Romanovs’ were murdered. From the Hill of Ascension enjoy views of the city and the large City Pond formed by the Iset River. Pay homage at the sorrowful Afghanistan memorial on Red Army Square and admire the gorgeous villas of Urals 19th century “gold merchants”. The tour also includes a visit to one of the local museums. Free afternoon. (B) 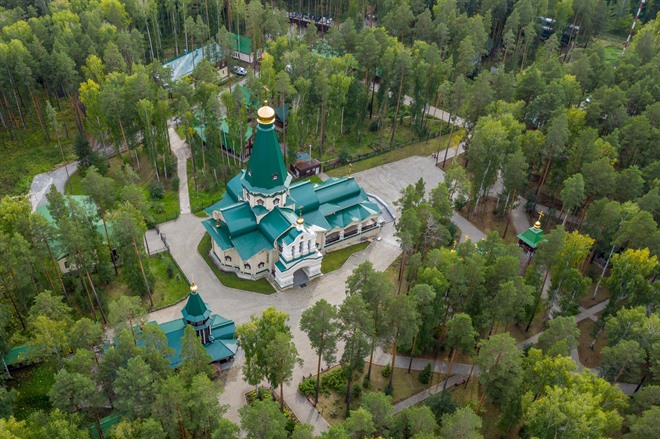 This morning head out of the city to the Europe-Asia Obelisk with a stop en-route at the Gulag Memorial. Just off the highway to Moscow an obelisk marks the exact point where Europe and Asia meet. Perhaps step across the border into the ‘Wild East’ to receive a special certificate and a glass of Soviet Champagne! The tour continues with a visit to Russia’s largest private collection of military equipment and vehicles, where you can get up close to the tanks, trucks, aircrafts and helicopters. After lunch drive to the Romanov's Monastery, built on the site where the Bolsheviks tried to hide the bodies of the Romanov family down the abandoned Ganina Yama mineshaft. Today it is a well known Russian Orthodox pilgrimage site. After visiting the seven beautiful wooden churches built for each member of the Royal family, continue to Porosenkov Log, where their bodies were found after being buried again. Transfer to the train station for the evening train to Irkutsk. (B,L)

DAY 7
ON THE TRAIN 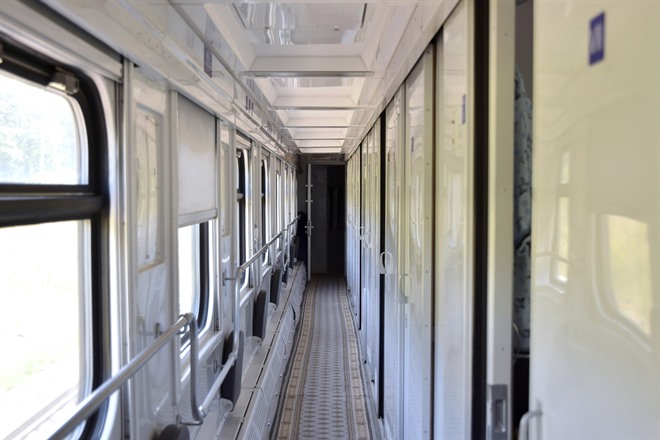 Today enjoy watching the Russian countryside out of the window, as the train trundles its way east, passing through the cities of Omsk and Novosibirsk.

DAY 8
ON THE TRAIN 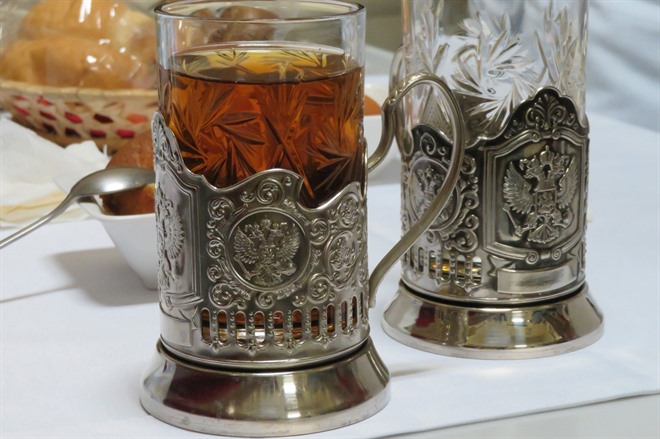 Today pass through the city of Krasnoyarsk located on the mighty Yenisei River, and the town of Tayshet, from where the Baikal–Amur Mainline begins, branching northeast from the Trans-Siberian Railway. 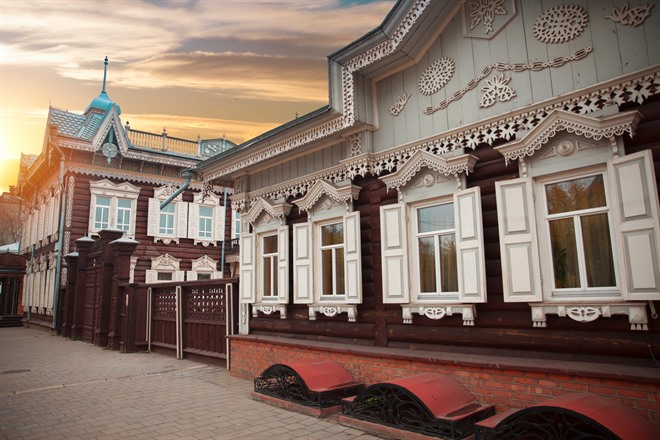 This morning arrive in Irkutsk, located on the Angara River (a tributary of the Yenisei River) and transfer to the Courtyard by Marriott Irktusk City Centre or similar. Enjoy a guided tour of Irkutsk, known as ‘Paris of Siberia’- referring to its old pastel-coloured Tsarist-era architecture and intricately decorated wooden houses. On a city tour visit Irkutsk Decembrists Museum, which includes the homes of Sergey Volkonsky and Sergey Trubetskoy. Wander through Memorial Park to the banks of the Angara and see the monument to the founders of Irkutsk, as well as the Cathedral of The Epiphany. (B) 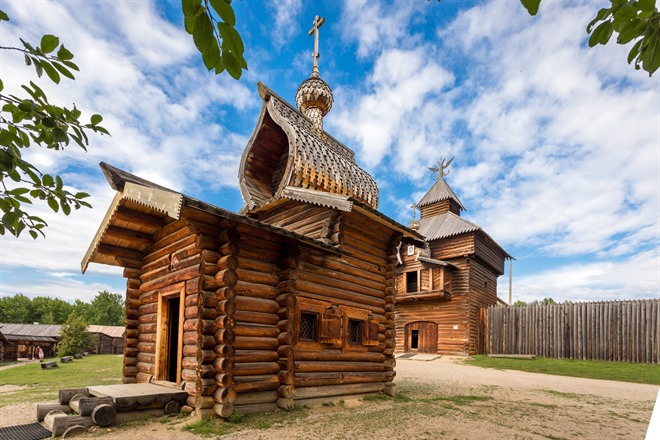 Today head out of the city to visit the village of Listvyanka strung along the shoreline of Lake Baikal. Here, enjoy a guided tour of the Baikal Museum and learn extraordinary facts about the world’s oldest and deepest freshwater lake. Did you know that 75% of the plant and animal species in the Baikal region are endemic? The museum is also home to two Baikal nerpa seals. We like the outdoor market, which sells lots of typical souvenirs, as well as Baikal’s famous omul fish - it’s delicious smoked. Take the chairlift up to a view point to look for Shaman’s Rock, protruding above the surface of the Angara River, which flows into the lake. En route back to Irkutsk stop off at Taltsy Museum, an outdoor ethnographic museum which displays the region’s traditional wooden architecture. (B,L) 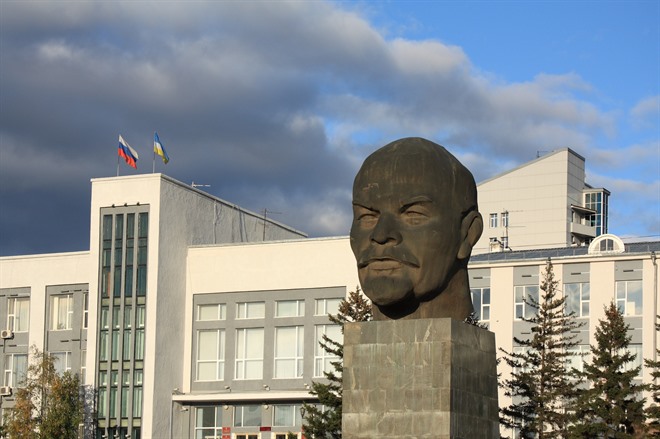 Today take the morning train around the southern shore of Lake Baikal to Ulan Ude and enjoy stunning lake views. On arrival in the mid-afternoon transfer to the Hotel Baikal Plaza or similar. After some time to freshen up, enjoy a short city tour of Ulan Ude with your local guide.

Located significantly nearer to Mongolia and China than Moscow and St Petersburg, Ulan Ude has a somewhat Asian feel to it and has traditionally resisted Sovietisation to maintain a distinct cultural identity. This is reflected in many facets of the city, such as the delicious Buryat and Mongolian cuisine and the easy-going nature, and strong Buddhist leanings, of its people. However, the city hasn’t completely escaped Soviet “progression”. Although the main square is a typical example of imposing Communist architecture, the giant Lenin head in its centre is a must-see and one of the most popular sights along the Trans-Siberian Railway. (B) 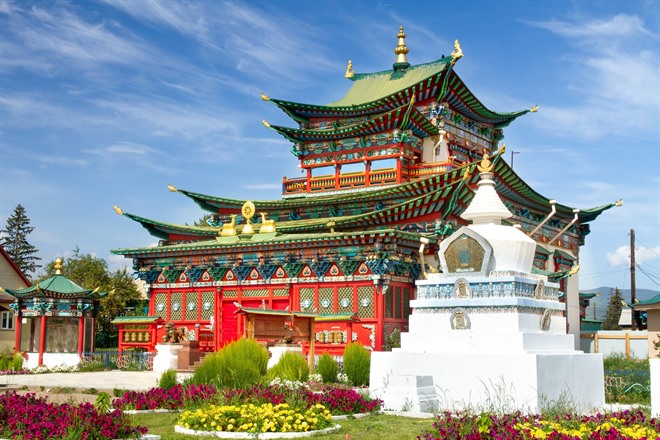 This morning visit one of the highlights of a stopover in Ulan Ude, the splendid Ivolginsky Datsan. Situated 35km from the city centre at the foot of the Khamar-Daban Mountains, this fascinating monastery is the centre of Buddhism in Russia and home to about 30 Lamas. Transfer to the train station for the mid-afternoon train to Vladivostok. (B) 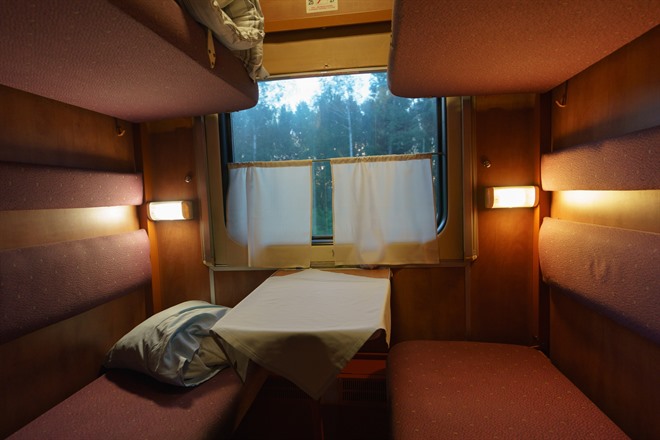 Travel further east along the Trans-Siberian Route, so dig out those reading books or perhaps a Russian dictionary and strike up a conversation with our Russian travelling companions. 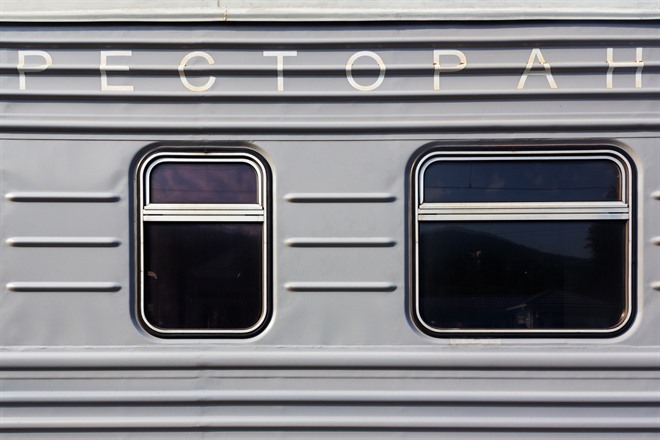 Cotinue further east passing through Chita and the city of Birobidjan - founded during the Soviet era as the administrative centre of the Jewish Autonomous Oblast. 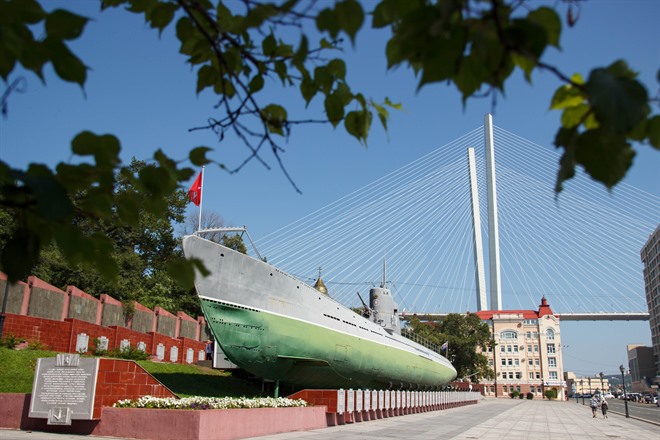 Arrive in Vladivostok - the eastern terminus of the Trans-Siberian Railway. Transfer to the Hotel Vladivostok Azimut or similar.

Afternoon guided tour of the city's key attractions including the Submarine Museum located in an old S56 on the waterfront next to the war memorial and eternal flame. Admire the view of Golden Horn Bay and Bridge from Eagle’s Nest Observation Platform. Travel out to Russky Island, home to the huge Far Eastern Federal University campus and learn about the military history of the island . 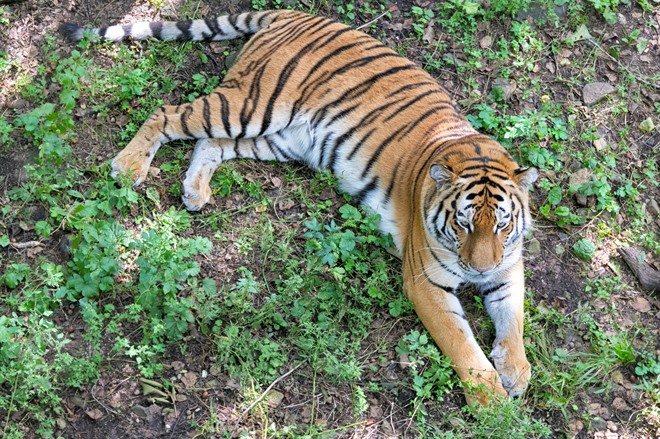 Head out of Vladivostok to Primorye Safari Park located around 70 kilometres from the city. The park was created in 2007 by Dmitry Mezentsev, a biologist and wildlife photographer. Animals live freely in their natural habitat, albeit a few less hectares than in the wild. The safari park also helps wounded and sick animals, releasing recovering animals back into the wild, and provides education on the environment. There are three areas: “Siberian tigers and hoofed animals”, “Birds and wild animals of Primorye” and “Amur leopard park”, where there is the opportunity to see the very rare Far-Eastern Leopard. (B,L) 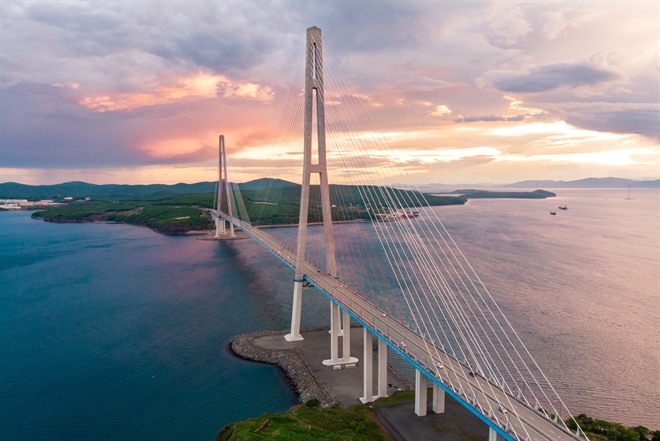 Transfer to the airport for the flight back to the UK via Moscow. (B)