Combine some of the highlights of Uzbekistan with a journey to the mysterious and mountainous Republic of Tajikistan on this suggested tailor-made holiday in Central Asia. Discover mosques and madrassas in the UNESCO listed site of Bukhara, travel off-the-beaten track to Shakhrisabz, the birthplace of Tamerlane, spend time in the Fan Mountains enjoying traditional Tajik hospitality and stop for a picnic on the shores of Iskander-Kul Lake. 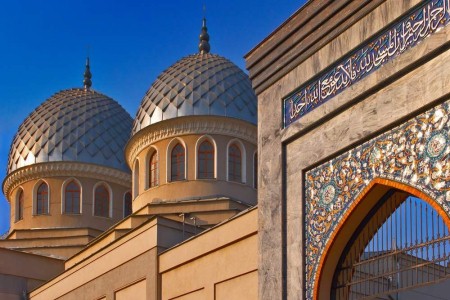 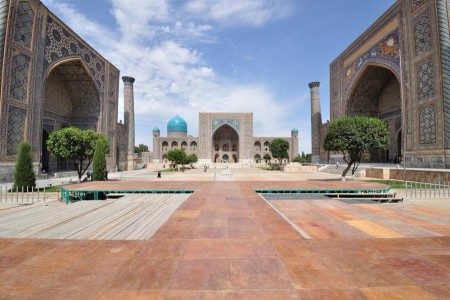 Arrive in Tashkent, meet the local guide and transfer to Samarkand (300 km, 5 hrs). On arrival check in to the hotel. In the afternoon embark on a sightseeing tour of this former grand capital of the conqueror Tamerlane with an introductory city walk including a visit to the Registan Complex and the grandiose Bibi-Khanum Mosque.
DAY 3
SAMARKAND TO BUKHARA 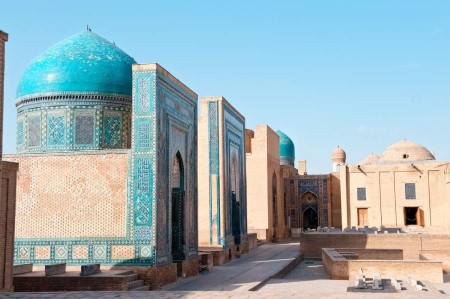 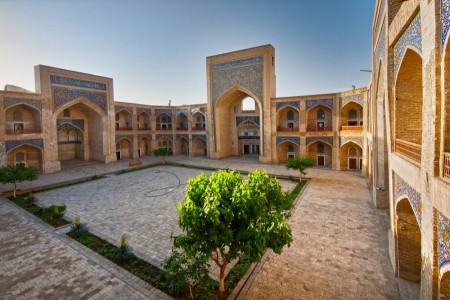 The region around Bukhara has been inhabited for at least five millennia and the historic centre of Bukhara, which contains numerous mosques and madrassas, is also a UNESCO World Heritage Site. Ethnic Tajiks constitute the majority in Bukhara, but the city has historically had a wide mix of ethnicities. Explore the highlights of this great city including Saminids Mausoleum, Chashma Ayub Mazar, Poi-Kalan complex, Ulugbek Madrassah, Lyabi-Hauz complex and the Ark Citadel. (B)
DAY 5
BUKHARA TO SHAKHRISABZ 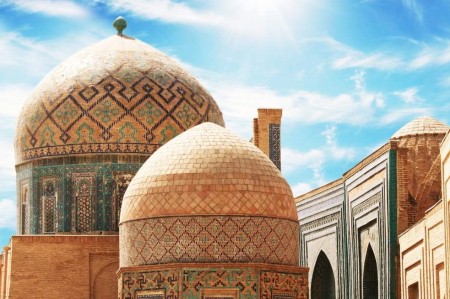 Travel to Emir’s Summer Palace located some 4km north of Bukhara. The old palace was built in the second half of the 19th century by Ahadkhan, father of the last emir of Bukhara. Visit the Bahauddin Haqshbandi Complex, who was one of the founders of Sufism. In the afternoon transfer to Shakhrisabz (290km, 4-5 hours) and check in to hotel for an overnight stay. (B)
DAY 6
SHAKHRISABZ TO TERMEZ 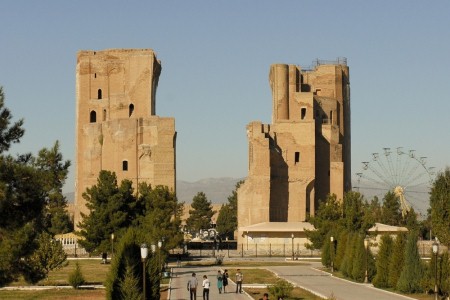 Explore the small town of Shakhrisabz, surrounded by fertile vineyards and orchards and best known for being the birthplace of Tamerlane. Discover Ak Saray Palace, which took over 24 years to build. Although most of the palace is in ruins, the entrance portals still stand and form a dramatic backdrop for a scenic park that stretches in front. Visit Kok Gumbaz Mosque and the Mausoleum of Sheikh Shamsedin Kulyal - spiritual tutor to Timur. In the afternoon continue to Termez (340km, 6 hours). On arrival check in to the hotel for two nights. (B)
DAY 7
TERMEZ 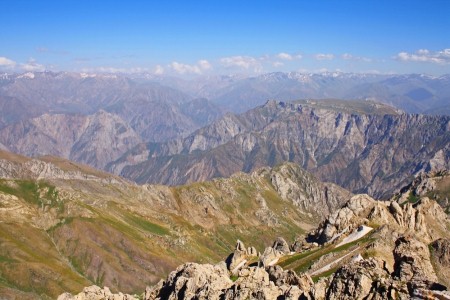 Modern day Termez is located on the southern Uzbek border with Afghanistan and surrounded by an attractive landscape dotted with ancient monuments and sights attesting to a more glorious past. Explore the town visiting sights including Fayaz-tepe Buddhism Complex, an ensemble of Sultan-Saodat Mausoleums with graves of aristocracy from the Samanid period, Kyrk-Kyz Farmstead, the Mausoleum of Khakim al Termezi. Head out of the town to the Kampyr-Tepe ancient settlement (around 40 km from Termez) and visit Jarkurgan village - famous for its medieval minaret. (B)
DAY 8
TERMEZ TO BAYSUN 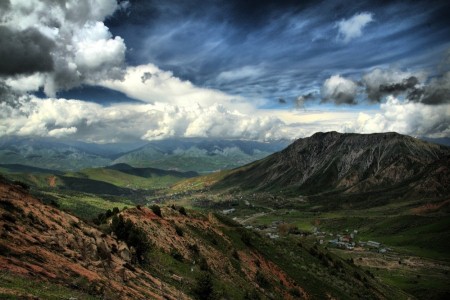 Travel towards the Baysuntong Mountains and to the town of Baysun (150 km, 2-3 hrs). En route to Baysun, break the journey with a side-trip to the 1,000 year old plane tree (chinara) in Sayrob settlement. Baysun, regional capital of Surkhandarya is a pleasant town surrounded by green valleys and the grand Ketmen-Chapti massif. The city and surrounding area is steeped in traditions, handicrafts, music, dances and folk customs kept alive by passing through the generations. Watch the traditional family craft of making carpets, see magnificent embroidery and learn about the local way of life, traditions and culture of these ancient Tajik and Turkic people. Overnight in a guesthouse. (B)
DAY 9
BAYSUN TO DUSHANBE 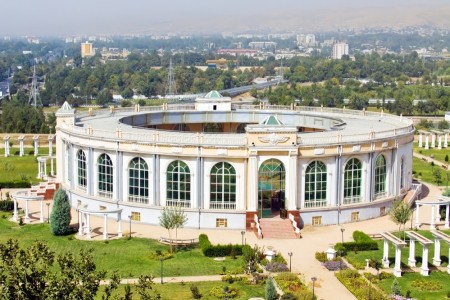 Drive to Dushanbe, crossing the border at Saryosiyo (150km, 3 hours). If time permits stop at the ruins of Hissar Fortress built in the 18th century. Dushanbe is a pleasant capital with its tree-lined streets and pastel coloured neo-classical buildings. Here visit the National Museum of Antiquities of Tajikistan and one of its highlights a 13m long sleeping Buddha some 1500 years old and excavated in 1966. Overnight in hotel in Dushanbe. (B,L,D)
DAY 10
DUSHANBE TO MAGRIB BOLO 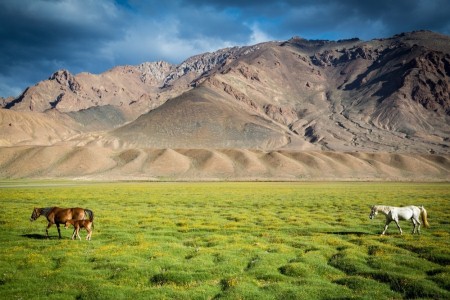 This morning drive through the mountain valleys to the Vagnob Valley, home to several hundred native speakers of Sogdian, a language that has barely changed since the time of Alexander the Great. Spend time in this small village dramatically surrounded by jagged peaks and the Zamin-Karor rock wall. Overnight in a traditional Tajik house. (B,L,D)
DAY 11
MAGRIB BOLO TO ISKANDER-KUL 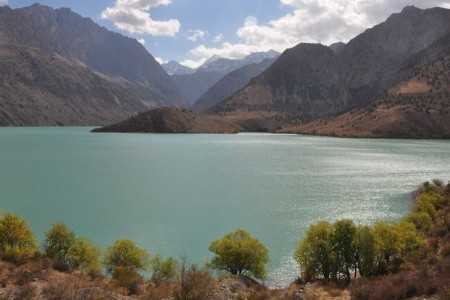 Drive though steep mountain passes to Iskander-Kul, the largest and arguably the most beautiful lake in the Fann Mountains. A glacier lake taking its name from Alexander the Great: Iskander is the Central Asian pronunciation of Alexander, and kul is lake in Tajik. Spend some time walking around the lake and a 25 minute walk takes you to a 40 metre high waterfall flowing out of the lake. After a picnic by the lake continue to the remote mountain village of Sarytag. Overnight in guesthouse. (B,L,D)
DAY 12
ISKANDER-KUL TO ISTRAVSHAN 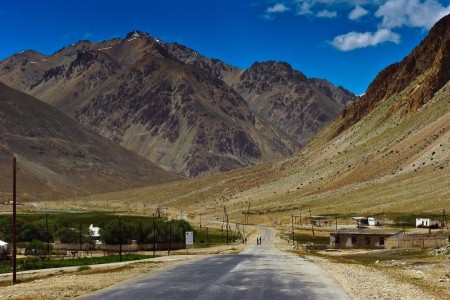 Drive to Istravshan (150km, 3 hours) located in the northern foothills of the Turkistan Mountain range. This small historic town has one of the best preserved old towns in Tajikistan and on arrival explore the maze of alleys that make up the old city – Shahr-e-kuhna. Discover the colourful central bazaar and the blue domes of the Abdullatif Sultan Medressa from the 15th century. Visit Teppe, the site of a Sogdian fortress which was stormed by Alexander the Great in 329BC. Overnight in a guesthouse. (B,L,D)
DAY 13
ISTRAVSHAN TO KHOJAND 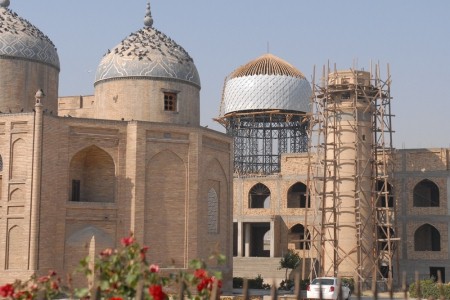 Transfer to Khojand (80km, 2 hours), capital of the Tajikistan’s Sughd province and the second largest city in the country. Founded on the banks of the Syr-Darya River by Alexander The Great as his easternmost outpost. Visit Sheikh Maslikhiddin Mausoleum and Mosque, as well as exotic Payshhambe Bazaar. (B,L,D)
DAY 14
KHOJAND TO TASHKENT 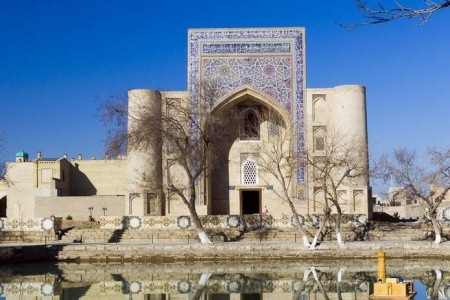 Travel back to Tashkent (160 km, 3 hrs), crossing the Tajik-Uzbek border at Oybek. Spend the afternoon sightseeing around Tashkent. Discover the Old city, Barak-Khan Madrassah, Yunus-Khan Mausoleum, Kaffal-al-Shashi Mazar Mausoleum, Kukeldash Madrassah, Independence, Tamerlane and People Friendship Square, and take a ride on the Tashkent Metro. (B)
DAY 15
FLY TO THE UK
Spend the morning at leisure before transferring to the airport for the flight back to the UK. (B)
Chat to a travel specialist

Price per person based on two travelling sharing a twin room 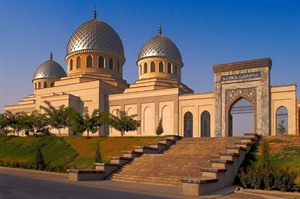 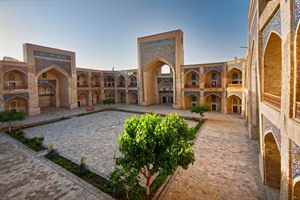 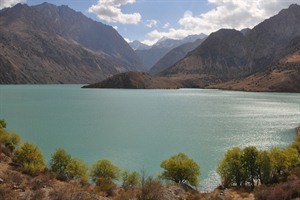 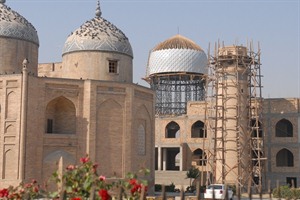