Travel through Russia in style on the Golden Eagle luxury train. Starting from Vladivostok, you will travel to Khabarovsk before following the Shilka and Amur rivers to Mongolia where you will visit the capital Ulaanbaatar and have the option to head out to Terelj National Park to enjoy the beautiful scenery of wild Mongolia. Then on to Lake Baikal where the train, hauled by a Soviet-era steam locomotive, will wind its way through tunnels along cliff-hugging tracks above the lake.

Continue on to explore the remote outpost of Irkutsk, the ‘Paris of Siberia'; Novosibirsk on the banks of the River Ob and Kazan, the capital of Tatarstan, with its pristine white walls which surround the site and are mirrored by the white government buildings and the presidential palace. Your tour eventually draws to a close as you arrive into Moscow with time to explore this magnificent city.

Please note you can book this itinerary from Moscow to Vladivostok - please contact us for details. 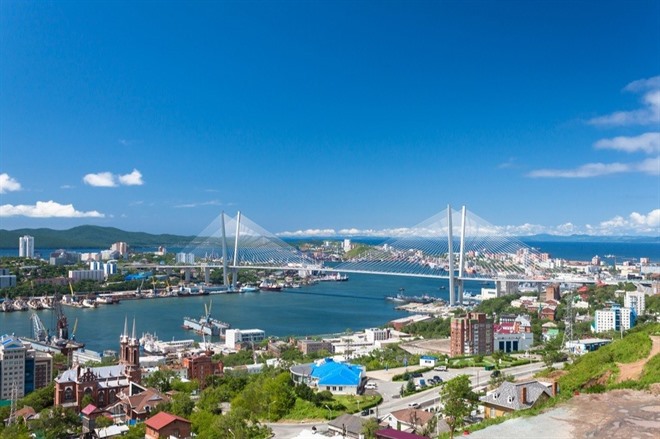 Arrive in Vladivostok, transfer to the Hotel Lotte for an overnight stay. Meet up with your fellow travellers over a delicious welcome dinner accompanied by specially chosen internationl wines. (D) 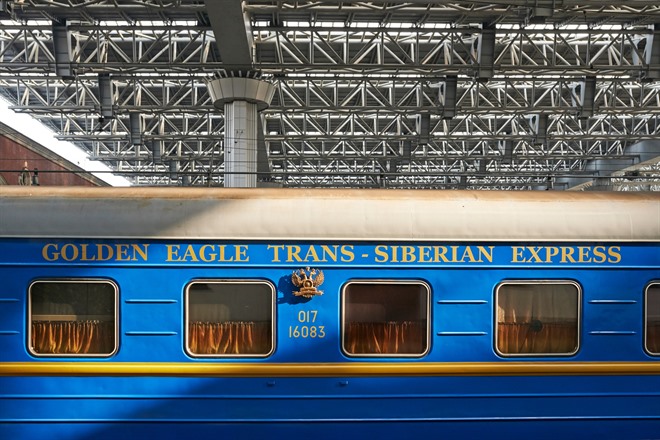 Today enjoy a city tour of Vladivostok, a military port located on the western shores of the Sea of Japan and home to Russia's Navy’s Pacific Fleet. Due to its military importance, the city was closed to foreigners between 1930 and 1992. Vladivostok (literally translated as ‘Ruler of the East’) offers visitors an interesting opportunity to explore its principal military attractions including a visit to a preserved World War Two submarine. See the iconic suspension bridge over Golden Horn Bay, one of the largest of its kind worldwide. Following a champagne reception at Vladivostok Railway Station, and with a military band playing on the platform, board the Golden Eagle Trans-Siberian Express. Settle into your cabin and enjoy dinner in the restaurant car as rail adventure westwards begins. (B,L,D) 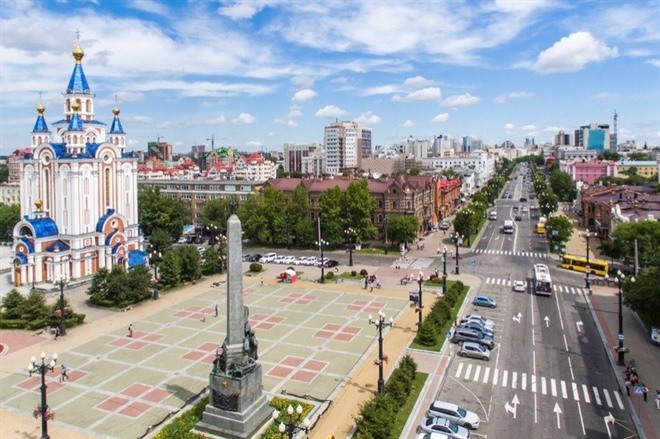 Arrive in Khabarovsk, located just 15 miles from the Chinese border. The city stretches along side the Amur River and its tributary, the Ussuri, and feels more like a relaxed coastal town than a bustling Siberian city, particularly in the summer when the sandy river banks are virtually transformed into a beach resort. Embark on a city tour taking in the monument to Yerofey Pavlovich Khabarov, the Far East explorer the city is named after, and admire the impressive World War Two memorial to the fallen soldiers. Spend some time at the fascinating Regional Museum housed in an attractive 1894 red-brick building, where visitors learn about the history, nature and development of Khabarovsk and indigenous peoples of the Far East. (B,L,D) 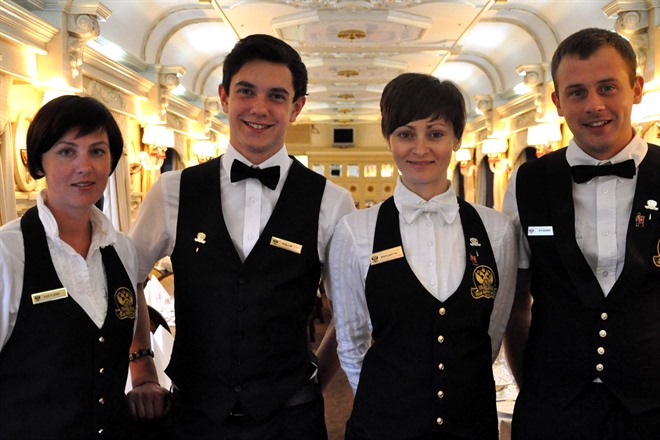 Today's journey on board follows the Shilka and Amur rivers, close to the Chinese border. Enjoy Russia at its most beautiful and remote as the landscape unfolds outside your window. Or attend one of the absorbing lectures or Russian language lessons. (B,L,D) 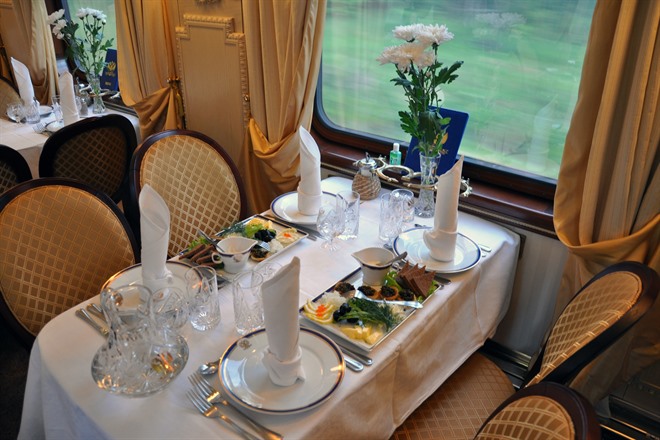 Today on board offers the perfect opportunity to practice your Russian as you watch the world pass by. For those who like to socialise, the Bar Lounge Car is the perfect place to enjoy a chat with your fellow passengers as you listen to the resident musician. (B,L,D) 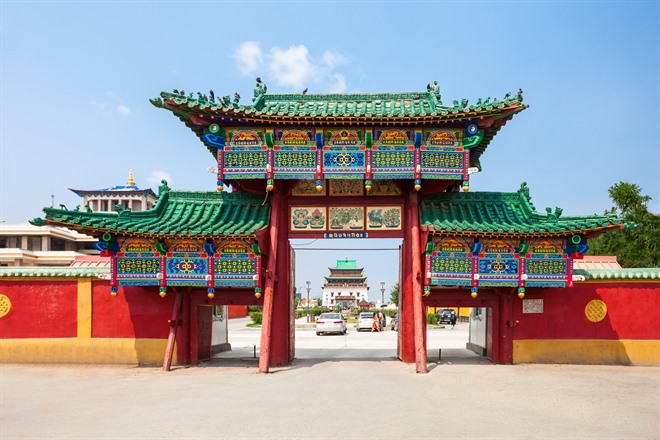 Today travel south to Mongolia and its capital Ulaanbaatar. Begin the city tour with a visit to Gandan Monastery, one of Mongolia’s most important Buddhist Monasteries housing a community of over 500 monks. At Chinggis Square (formerly Sukhbaatar Square) see the central monument to Genghis Khan, undoubtedly the most feared and revered Mongol. Drive out of the city to Terelj National Park and enjoy the beautiful scenery of wild Mongolia, and visit a traditional Ger, meet a nomadic family or try your hand at horse-riding, an intrinsic part of Mongolian life. Alternatively stay in the city and visit the National Museum and Bogd Khan Winter Palace Museum. There is free time for shopping for Mongolian souvenirs and a performance of traditional Mongolian throat singing and contortionists. (B,L,D) 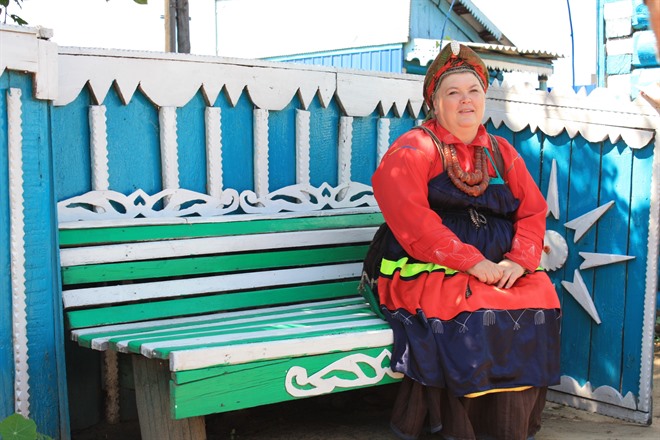 The ethnic and cultural diversity of Ulan Ude, the capital of the Buryat Republic, offers a unique insight into its heritage. Learn about its history on a city tour and discover the World's largest Lenin head. Head out to visit the splendid Ivolginsky Datsan. Located some 22 miles from the city centre at the foot of the Khamar-Daban Mountains, this fascinating monastery is the centre of Buddhism in Russia and home to around 30 Lamas. Visit the Old Believer's Village and learn about the history of these religious people and how they came to settle in this area. Enjoy a concert of local traditions and folk singing. (B,L,D) 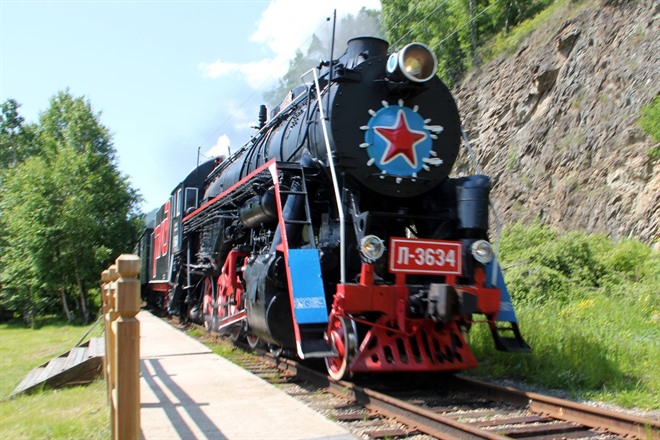 Few natural sights can surpass the beauty and grandeur of Lake Baikal, the deepest lake in the world holding 20% of the world’s freshwater. For five hours, the train winds its way through tunnels along cliff hugging tracks above the lake. To add to the grandeur of the day the Golden Eagle train will be hauled by a Soviet Era steam locomotive on this beautiful section of line. There will be plenty of opportunities to take photographs as you travel along the lake shore. Weather permitting, there is a photo stop and for the brave there is time for a refreshing swim in the crystal clear and ice-cold waters of Baikal.

Travelling onwards to the end of the Baikal branch line, leave the train and travel by boat across the lake to Listvyanka, a small lakeside village. Here, visit the fascinating Lake Baikal Museum. Enjoy a delicious barbecue including freshly smoked omul fish. There is an optional hiking opportunity up Chersky Mount or you can choose to take the chair lift. From the top there is a spectacular and panoramic hillside view of the grandeur of the lake below. (B,L,D) 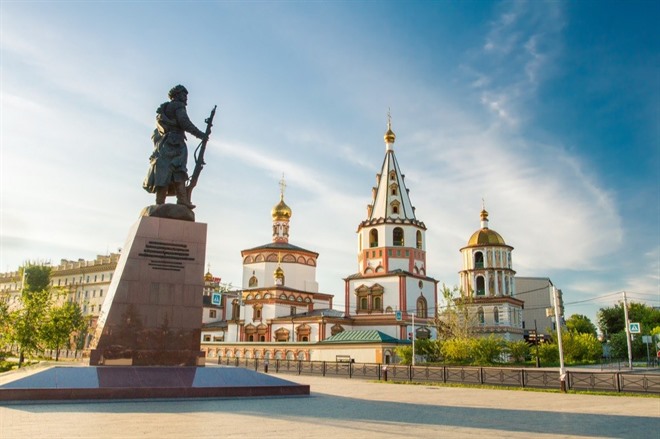 Today embark on a city tour of Irkutsk, known as the ‘Paris of Siberia’, which takes in the most significant sites and museums in this fascinating city, including an exploration of the classic wooden architecture with its intricately carved lace-like decorations that has given many of this region’s buildings such a distinctive and unique appearance. Visit the Volkonsky House Museum, which is dedicated to the memory of the aristocrats who were exiled to this remote outpost after the failed Decembrists uprising of 1825. Enjoy a champagne reception and private concert. Optional excursions today can include a cooking experience with a local chef or a visit to a traditional Russian Dacha (summer house) to gain an insight into the everyday life of an average Russian family. (B,L,D) 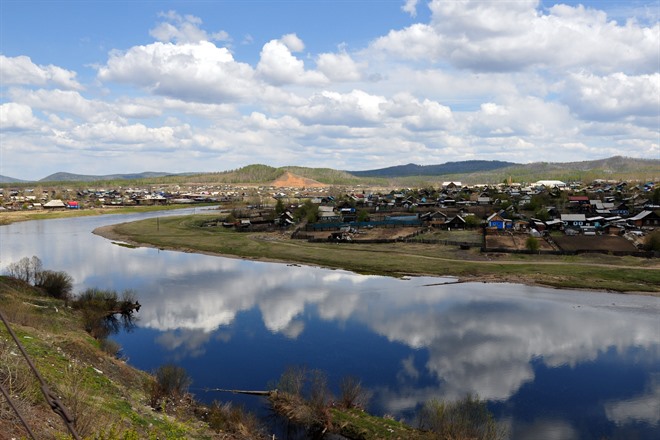 A day to unwind on-board and reflect on the many sights and sounds experienced on the journey thus far. Chat to your fellow passengers, perhaps learn a few words of Russian or simply enjoy the ever-changing landscape outside your window as it unfolds. (B,L,D) 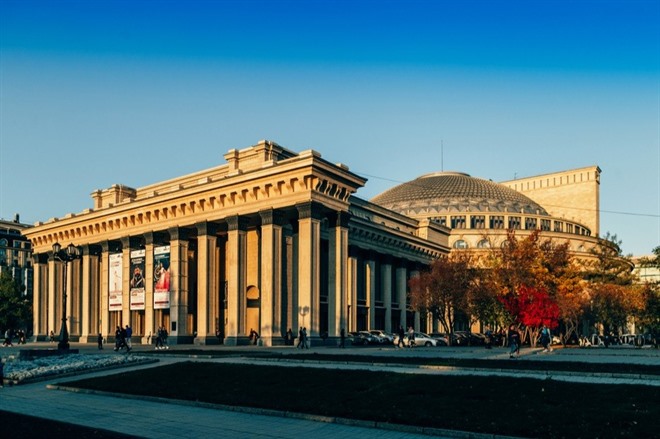 Today explore the modern ‘Soviet’ city of Novosibirsk located on the banks of the River Ob. Visit Lenin Square where the imposing Opera House is located. An architectural marvel, it houses two permanent ballet and opera companies and is one of the largest opera houses in the world. In front of the Opera House, see another impressive statue of Lenin. Time permitting, visit Novosibirsk’s excellent Railway Museum. The museum displays locomotives and rolling stock from the late 1800s, including carriages of the Tsars, through to the Soviet era. Alternatively, you can choose to visit the Mineralogical Centre with its fine display of Siberian minerals. (B,L,D) 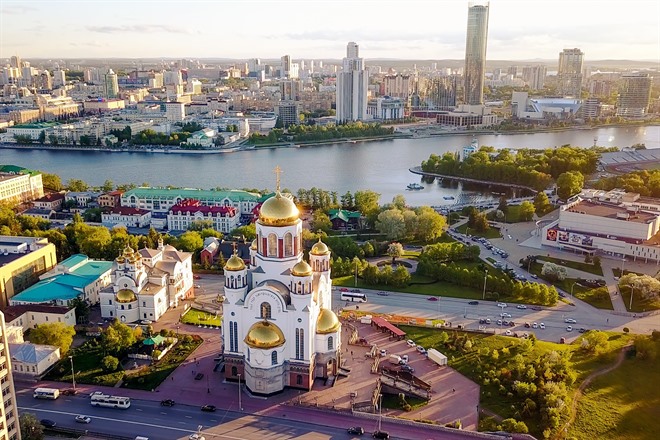 Explore the capital of the Urals on a city tour, visiting the poignant site where the Romanov, Tsar Nicholas II of Russia, was executed with his family by the Bolsheviks in 1918 following 78 days of imprisonment. Today a church stands on the site and is dedicated to their memory. Then drive to the obelisk marking the geographical border and drink a glass of champagne with one foot in Europe and the other in Asia. Time permitting, there will be an optional visit to the Museum of Military Machinery. This museum houses an amazing collection of different types of military hardware including tanks, aircraft, boats and even armoured trains. (B,L,D) 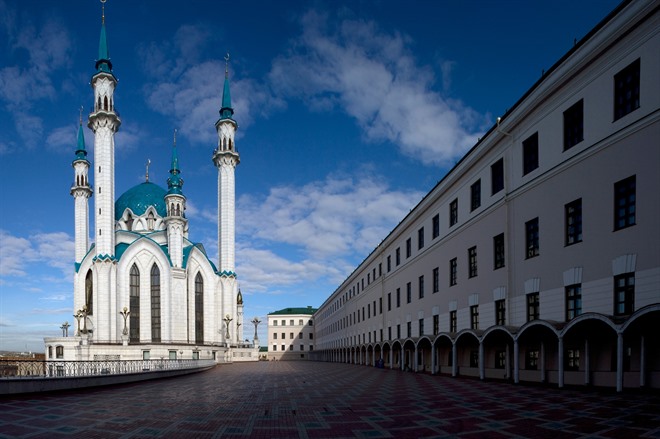 Located on the River Volga, the picturesque and historic city of Kazan is the capital of Tatarstan. The city tour here includes the incredible Kremlin Fortress, a UNESCO World Heritage Site. The most striking thing about Kazan's Kremlin is its pristine white walls, which surround the site and are mirrored by the white government buildings and the presidential palace. The complex reflects the ethnic mix of the Russians and Tatars who live here and their two centres of worship, containing both the magnificent Kol Sharif mosque and striking Annunciation Cathedral. As Kazan is the birthplace of one of Russia’s most famous opera singers, Feodor Chaliapin (1873-1938), enjoy a private concert of his music. There is also time to wander through the main pedestrian area of Kazan and immerse yourself in the atmosphere of the city. (B,L,D) 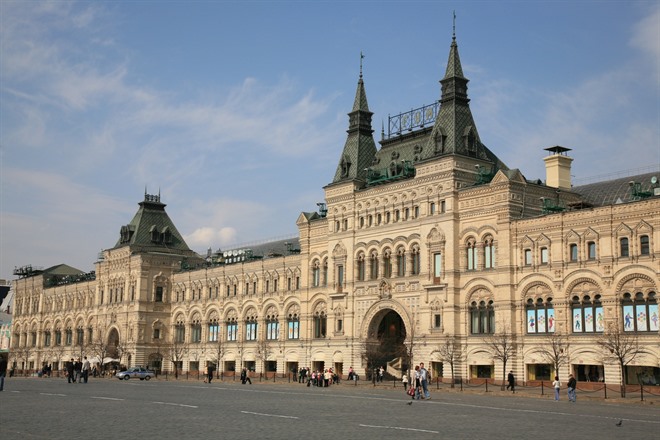 Today this incredible rail journey finishes in the magnificent city of Moscow. Admire the grandeur of the Kremlin, the spiritual, historical and political heart of Moscow. See the treasures of the Tsars in the Armoury Chamber where there is an exclusive private viewing. The city tour continues to Red Square, the iconic symbol of Russia’s former military and political might with its eclectic mix of fascinating architecture. Admire the ornate St Basil’s Cathedral’s magnificent onion-domed spires and marvel at the beautiful façade of the world-famous GUM department store which was constructed in Tsarist times. After lunch tour the opulent and unique stations of the Moscow metro - showpieces of Socialist art furnished with statues, frescoes and mosaics.  Optional excursions include the famous State Tretyakov Gallery (National Museum of Fine Art) or the Space Museum. Check in to the luxury Four Seasons Moscow for an overnight stay. (B,L,D) 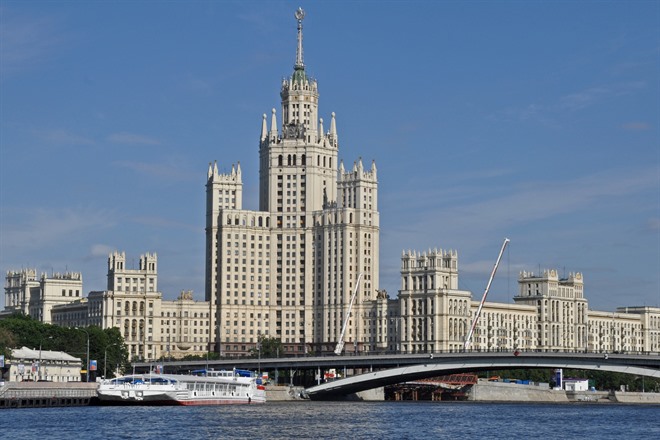 Transfer to airport for flight back to the UK or onward travel. (B)

Golden Eagle Trans-Siberian Express is a luxury hotel on rails. Every class of cabin of board is lavishly furnished and features a private en-suite wet room or bathroom with complimentary toiletries, daily turn-down service and its own cabin attendant who is on hand to assist twenty-four hours a day. Choose from 3 categories of cabins on board: Silver Class, Gold Class or Imperial Suites. There is a lounge-bar, where you can relax with your fellow passengers or take part in variety of experiences such as Russian language lessons and lectures. Dine in the elegant restaurant carriages and sample some Russian gastronomic specialities such as black sturgeon and salmon caviar.

Silver Class – These compartments (5.5 sq metres) sleep two people in a small double lower bed and a single upper bed. The en-suite wet room has a washbasin, toilet and shower. There is also a DVD/CD player, flatscreen TV and safe, as well as wardrobe space and a large picture window. Tea, coffee, soft drinks and mineral water are available at all times.

Gold Class – These compartments (7 sq metres) offer all of the amenities of Silver Class but the en-suite bathroom additionally benefits from a separate power shower cubicle and underfloor heating. The Gold Class fare includes complimentary drinks from the Standard Bar List in the Golden Eagle's Bar Lounge Car.

Imperial Suites – These crème de la crème suites are the largest on any train in Russia measuring a little over 11.1 sq metres. Enjoy a bottle of complimentary bottle of Dom Perignon Champagne when you board. In the day the compartment serves as an elegant drawing room. At night the compartment is made up with a king size bed. There is a personal minibar, drinks from both the standard and premium bar list in the Bar Lounge Car are included, and guests may take advantage of a private car and guide for exclusive excursions along the route.