This exclusive Regent group tour combines the historic cities and stunning landscapes of Albania with forays into Kosovo and North Macedonia to visit the unmissable Balkan treasures of Prizren, Skopje and Lake Ohrid.

Staying in accommodation from boutique hotels to mountain guesthouses and even a luxury five-star hotel in Tirana. Travel in a small group with a local guide, discovering Albania’s national parks and UNESCO World Heritage Sites and enjoying many delicious local meals along the way.

This is a small group tour that operates with a minimum of 10 persons/maximum of 16. 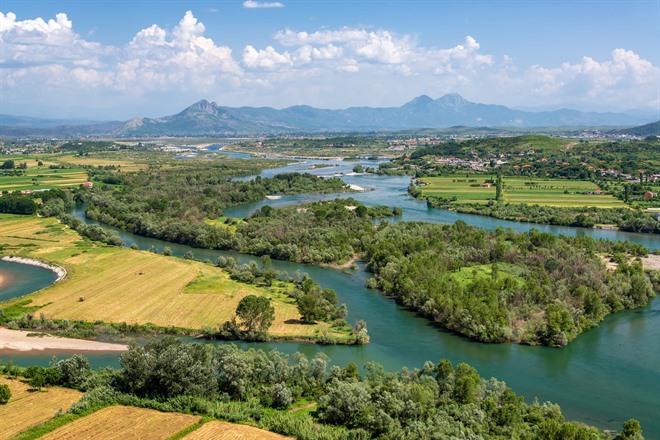 Fly to Tirana. On arrival, meet your tour guide and transfer to the northern town of Shkodra. Enjoy a welcome drink and light meal on arrival. (D) 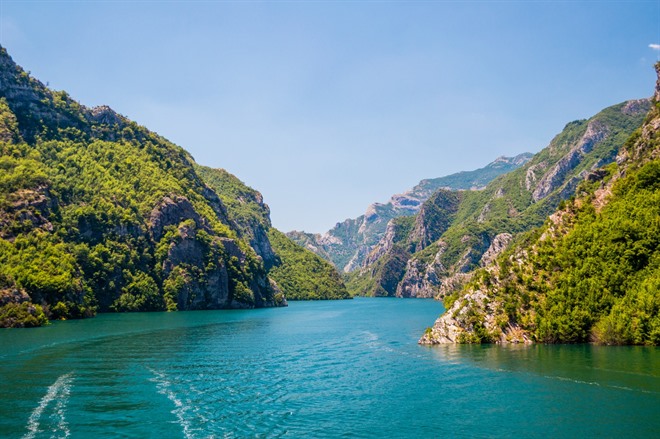 Tour Shkodra this morning. Set on the banks of a sparkling lake and at the foot of the wild and rugged mountains of High Albania, Shkodra was once the largest and most flourishing town in the country. Even today it remains the cradle of northern Albanian culture. Discover Rozafa’s Castle and Marubi Museum. Afterwards, drive to the village of Fishta where one of Albania’s most renowned restaurants ‘Mrizi i Zanave’ can be found. The restaurant specialises in regional organic food and was recently featured on Rick Steins’ ‘Venice to Istanbul’ series. Return to Shkodra for an evening at leisure. (B,L)
DAY 3
SHKODRA TO VALBONA 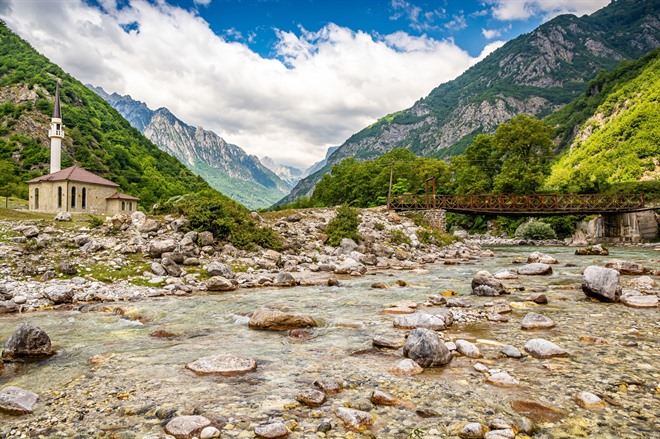 This morning venture into the Albanian Alps and the remote town of Valbona. Board the Komani ferry and sail along the Koman Lake, past remote hillside settlements. Originating from the construction of three dams, Lake Koman passes through much of the beautiful Albanian Alps; a thoroughly memorable experience and a highlight of the tour for many. Arrive in the village of Fierza and continue on to explore the Valbona Valley in the heart of the Albanian Alps. The village of Valbona is tucked underneath Mount Jezerca, the highest mountain wholly in Albania. Overnight at a guesthouse in Valbona. (B,D)
DAY 4
VALBONA TO PRIZREN 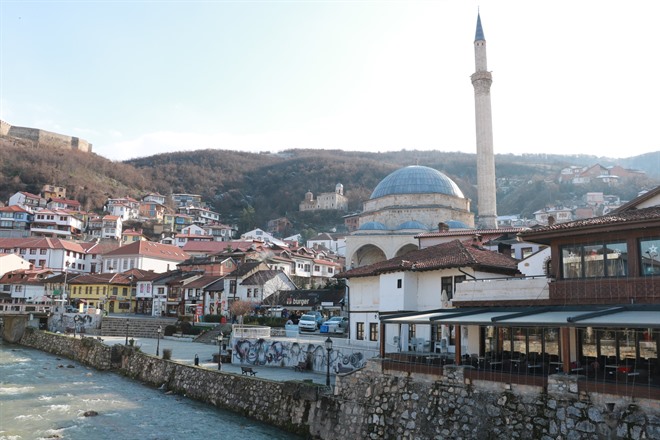 Spend an unforgettable morning in the Valbona Valley. Visit the ’Gheg’ community and learn how they make a living in this remote and dramatic landscape before having lunch in a “stan” – the traditional shepherds' summer house on the slopes of Gjarper Mountain. Continue on to Kosovo and the famous Decani Monastery. The Decani Monastery is the largest medieval church in the Balkans, containing stunning and painstakingly preserved murals. The monastery dates from the 13-th century and consists of a combination of gothic, roman, byzantine and baroque architectural styles. The monastery is recognised by UNESCO as a world heritage site. Make a final stop in Rahovec for wine tasting at the Stone Castle Winery before reaching Prizren for the overnight stay. (B,L,D)
DAY 5
PRIZREN TO SKOPJE 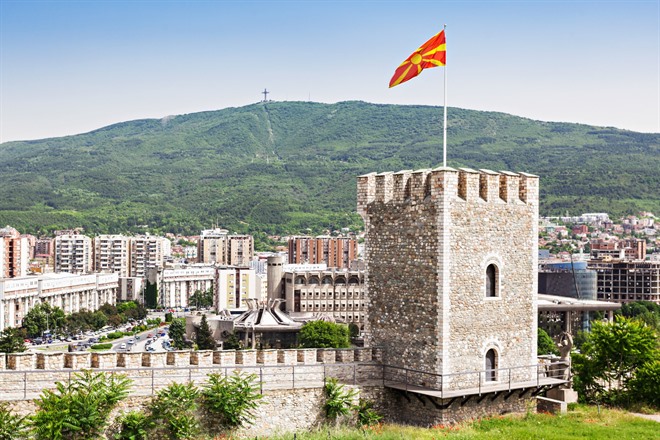 Embark on a walking tour of the pretty Ottoman town of Prizren. Known for its ethnic diversity, Prizren has a long tradition of tolerance and inter-ethnic cooperation featuring no less than 39 Christian buildings and 46 Islamic. Highlights include the Sinia Pasha Mosque and the Museum of the Prizren League. Make a quick pit stop to shop for the silver filigree that the town is famous for producing before heading to Europe’s newest capital Prishtina. The city is very compact and a short walk around the centre will take you past the futuristic National Library, Monument of Skanderbeg and the Grand Mosque. After a few hours here, head on to North Macedonia and the capital Skopje. Take an evening walk through the city, discovering the Old Bazaar and the many monuments built during the regenerative Skopje 2014 project. Overnight here. (B,D) 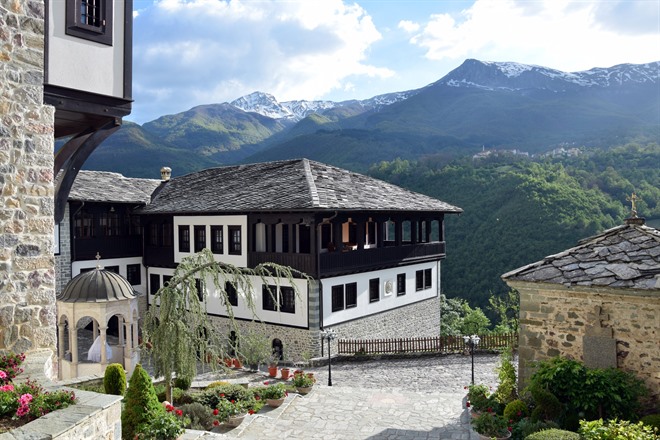 Walk up to Kale Fortress this morning to take in the morning hustle and bustle of the city below before moving on to the lakeside town of Ohrid in the south of the country. En-route visit Tetovo, famous for its Painted Mosque. Upon arrival in Ohrid, check-in to your hotel for a 2 night stay and go for dinner in the town. (B,D) 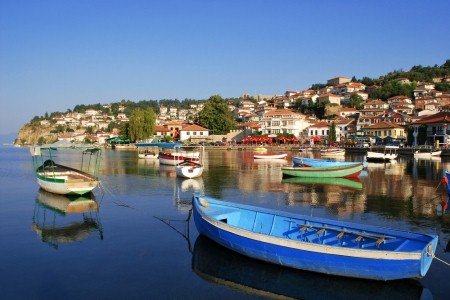 Explore Ohrid on a full day tour. walking tour of the town which starts from the square of St.Clement and visits the old part of the town, stopping at the Lower Gate and the archaeological museum. Explore the church of St Sophia and then on to the Roman theatre which dates back to the 2rd century BC. Continue to Plaoshnik, the site of the reconstructed church of St Clement which stands beside the original site of St Clement’s University. From here head towards the Church of St Jovan at Kaneo, which was built at the end of the 13th century, and is one of the most photographed churches in the Balkans due to its beautiful location on the cliffs directly above the lake. Return to the town by boat across the lake. (B,L) 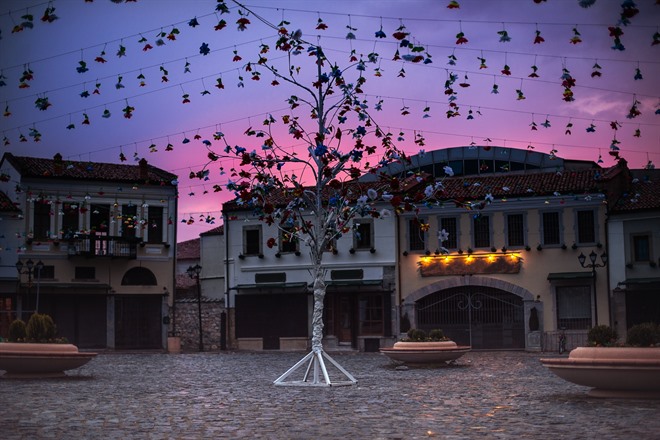 Visit the Monastery of Sveti Naum this morning. The magnificent grounds of the Sveti Naum monastery are a real treat and contain the source of Lake Ohrid’s water. After the visit, journey through Prespa Lake and Galicia National Park en-route to Albania. On arrival enjoy a walking tour of Korce, known as the country’s centre of culture and the arts, the first Albanian language school opened here in 1887. The city served as a very important trading market and caravans travelled from here to Greece, Turkey, and Russia. Korce today exhibits eastern characteristics, along with traces of French influence in its urban scheme and grand architectural planning. Visit the Orthodox Cathedral, the Old Bazaar, the Museum of Medieval Arts and Albanian school museum. Free time in the afternoon in Korce and overnight in the city. (B,D) 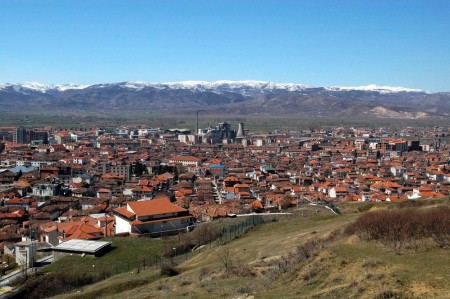 After a three hour drive in the morning, and a brief stop in the town of Erseka- Albania’s highest town- stop in Permet for lunch. The city of Permet lies along the Vjosa river valley. The journey between Permet and Gjirokaster is one of the most scenic highlights of the tour, with imposing mountains rising up alongside beautifully green meadows covered in wild flowers and the river Vjosa running alongside. Continue on to the UNESCO city of Gjirokaster for a brief orientation tour before checking in to the hotel for an overnight stay. (B,D) 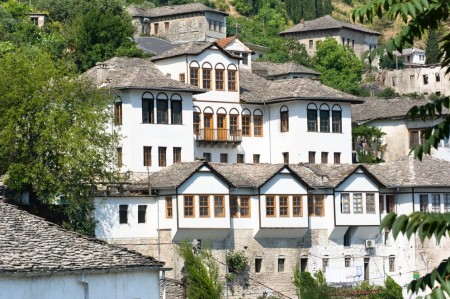 After breakfast, take a walking tour around Gjirokaster. Known by many as the ‘City of Stone’, Gjirokaster comprises hundreds of Ottoman-style tower houses with distinctive stone roofs, wooden balconies and whitewashed stone walls. Dominated by the sheer flanks of its vast castle, Gjirokaster is a magical city with a tumultuous past. A walk around the network of cobbled streets will transport you back in time. A visit to the vast 13th-century Castle brings the adventurous tales of medieval rulers and communist atrocities alive. En-route to Saranda, stop at ‘Labova of the Cross Church’. The Church is one of the oldest in Albania and once contained a relic believed to be part of the true cross of Christ. Make another stop at the Blue Eye Spring before reaching the coastal town of Saranda, where you will spend 2 nights. (B,D) 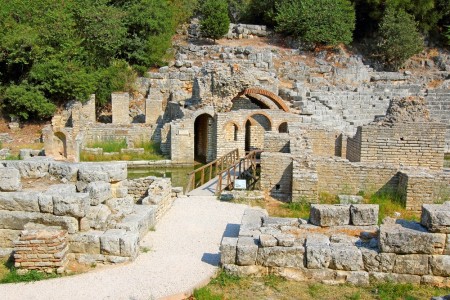 Visit Butrint archaeological site today. Butrint is a national park that includes a very well preserved archaeological area and the wetlands around the lake provide shelter for different animals and aquatic species in danger of extinction. The site was at it’s most prominent during the Roman period when the city was proclaimed a Roman Colony and used by the Roman aristocracy as a holiday destination. Enjoy lunch in the small resort of Ksamil and an afternoon at leisure in Saranda. (B,L) 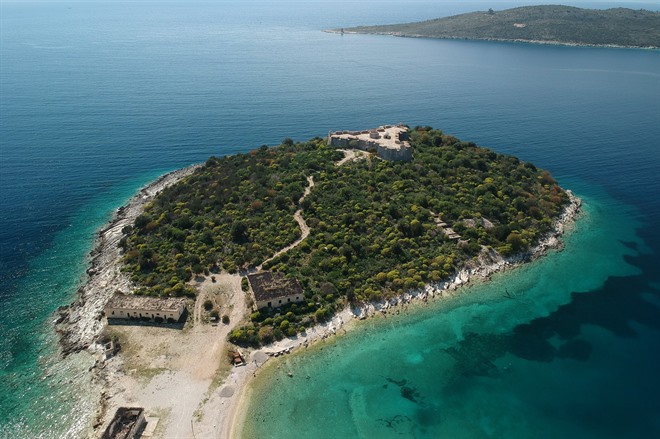 Set off along the beautiful Albanian Riviera today. First stop will be at Porto Palermo bay. The Castle of Porto Palermo is located on a small peninsula built by Ali Pasha of Ioannina in the early nineteenth century. Enjoy dramatic views of the coast below as you drive up above the clouds and over the Llogara Pass and on to Llogara National Park for a leisurely walk and perhaps a swim! Continue on to Vlore for a short quick look, visiting Independence Square where the Declaration of Independence was signed in 1912. Reach Berat for the overnight stay. (B,D) 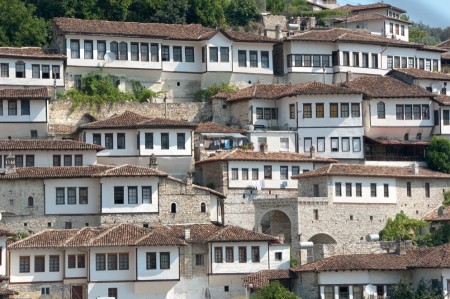 Berat is known as ‘The town of a Thousand windows’ due to the many large windows that decorate the houses of the old town. The town is renowned for its historic architecture and is on the register of UNESCO World Heritage sites. The town has several beautifully decorated 15th Century mosques and a very large number of Byzantine Orthodox churches. Several of the churches have frescoes by the well known painter Onufri. One of the highlights is a visit to the Onufri Museum, where many fine examples of Onufri’s work are displayed, including many splendid iconostas. Depart Berat for Durres for a quick look at Albania’s second largest city. Durres is the main port and the second biggest city in the country and it is home to some important archaeological monuments that testify to the city’s glorious past. Arrive Tirana in the early evening. (B,D) 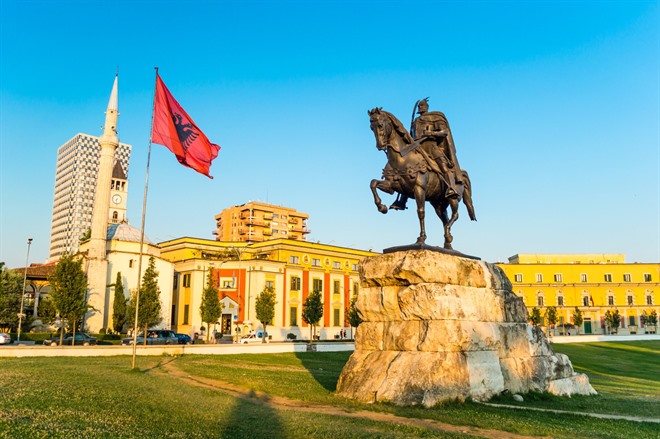 Today’s tour of Tirana begins in the lesser known parts of the city. Visit the memorials to the British and American mission in Albania and the National Martyrs Cemetery of Albania, located on a hill overlooking the city. Some 900 partisans who died during WWII are buried in the cemetery. The cemetery was also the resting place of former leader Enver Hoxha, who was subsequently disinterred and given a more humble grave in another public cemetery. Continue the city tour of Tirana with visits to the National Museum, with its impressively decorated façade, National Art Gallery and Et’hem Beg Mosque. Tirana could be described as a cross between Istanbul and Naples with a pinch of Minsk. The capital and the biggest city in Albania offers a wide range of activities, museums and monuments to explore, most of which are centred around Skanderbeg Square and along the Martyrs of the Nations boulevard. (B,D)

Last stop of the tour will be Kruja. Visit the restored Castle and Citadel and the Skanderbeg Museum - located inside the castle and erected in memory of the Albanian national hero. Skanderbeg was originally from the area and Kruja was a strategic point in the anti-Ottoman resistance. Shop for authentic souvenirs at Kruja’s old bazaar before heading back to Tirana airport for the flight back to the UK. (B) 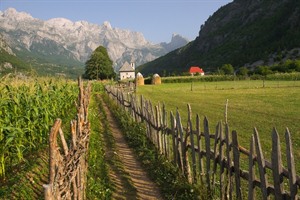 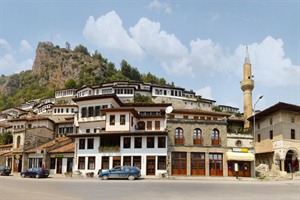 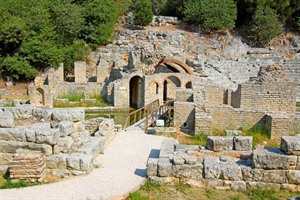 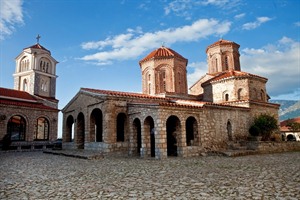