For more than a century, the Trans-Siberian trains have chugged across the world’s largest country, regardless of weather, revolution or political upheaval, providing an essential link for families and traders alike. For travellers who recognise that it’s the journey and not always the destination that matters, an epic Trans-Siberian Railway Journey cannot be beaten.

Transporting locals, exotic and mundane goods, military personnel and those seeking a new life, the working trains are not designed for lavish travels in style, but they provide travellers with an authentic experience and a genuine sense of adventure. Days on board are spent conversing with other fascinating voyagers and gazing out over ever-changing Siberian scenery, broken up by stops at remote railroad towns, lesser-visited cities like Kazan and Yekaterinburg steeped in Soviet history, and trips to the world’s largest freshwater lake: Lake Baikal.

Those looking to journey in greater comfort can opt instead for a luxury journey aboard a private chartered train, with plush cabins and fine dining, such as the Tsar’s Gold or the Imperial train. Typical routes stretch between Moscow and Beijing, or end instead in Ulaanbaatar allowing voyagers to explore the Gobi Desert. For an even more alternative experience, the BAM Railway – short for the Baikal-Amur Mainline – departs from the main Trans-Siberian line to instead end in Vladivostok.

At Regent Holidays we offer a personal service and use our expert knowledge of destinations to ensure you have an unforgettable experience. From booking to travelling, our Travel Specialists will be with you every step of the way and are on hand to answer any questions you may have. 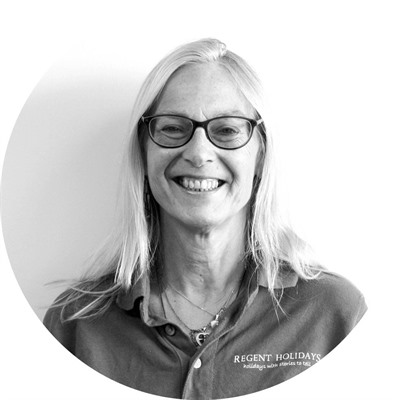 Christina Gibbons
Trans-Siberian Railway Travel Specialist
Trustpilot
You spend so much of your journey across the tundra on board, that we recommend getting to know your carriage attendant! These people become all-powerful during the journey and can make terrific allies. They clean your compartment and bathroom, let you know how long the train will stop for in each city, lock your compartment whilst you are dining in the restaurant carriage and most, importantly, make sure you're awake and ready to depart the train when it's time to get off and explore your latest stop.

Chat to a travel specialist
Chat to a travel specialist
Christina's Tips
1
During the summer, take a dip in the deep, cool waters of Lake Baikal; one swim is rumoured to add years to your life.
2
Explore the Baroque churches, colourful buildings and a lively dining scene in the old town of Irkutsk.
3
Sample smoked omul. You can't say you've visited Siberia until you've tucked into Lake Baikal's endemic fish.

Russia World Cup 2018: the inside story of the host cities
There’s more to see in each of Russia's world cup host cities than the local equivalent of Bovril and Balti pies.
Christina's Recommended Articles

Russia World Cup 2018: the inside story of the host cities
There’s more to see in each of Russia's world cup host cities than the local equivalent of Bovril and Balti pies.
All Articles On Trans-Siberian Railway

Regent Holidays has been pioneering travel experiences to a wide range of unique and off-the-beaten track destinations since 1970. Our award-winning team of experts will offer you unparalleled advice when it comes to finding your perfect holiday and take you to places that other tour operators can’t. Read more about us

For the latest travel advice from the Foreign and Commonwealth Office check www.gov.uk/travelaware

From Moscow to Vladivostok or Beijing, and all the unique stops in between.

Baikal-Amur Mainline Group Tour
Head off the beaten track with the BAM Railway.

Vladivostok
The eastern terminus of the Trans-Siberian Railway,

Novosibirsk
A fascinating large city and a testament to Soviet progress.