Our Russia travel specialist, Christina Gibbons, has visited the world's largest nation many times. On her most recent trip she learned that there is always more to discover in this rapidly changing country.

Sitting, as always, in the stationary Moscow traffic from the airport, my fellow traveller remarked "as a child I remember gazing in wonder at the rainbow of coloured smoke spewing from the chimneys in the neighbouring ‘Chemical District’". Oh the innocence of a child’s eyes! The toxic chimneys have long since gone, giving way to high rises of glass and steel, but still the district retains its name, a grim reminder of Soviet times. Pollution these days comes from thousands of car exhausts instead. It is so much quicker, but so less fashionable to walk or take the ever efficient and cheap metro - 55 roubles for a single journey.

Heavy industry is not the only remnant of the past. There is another one which will soon disappear. Those so ugly - but a necessary evil to overcome the chronic post-war housing shortage - Khrushchev’s five storey apartment blocks are being swept away in favour of tall apartment towers with more room per square metre and all mod cons. Not only will the occupants of the old apartment blocks be upgraded to these swanky news ones, but the local government will throw in a removal van free of charge for the day. Khrushchev’s legacies occupy some prime real estate so the motive is not purely altruistic, even considering the cost of moving residents, there will still be plenty of spare apartments to rent or sell at eye-watering prices. 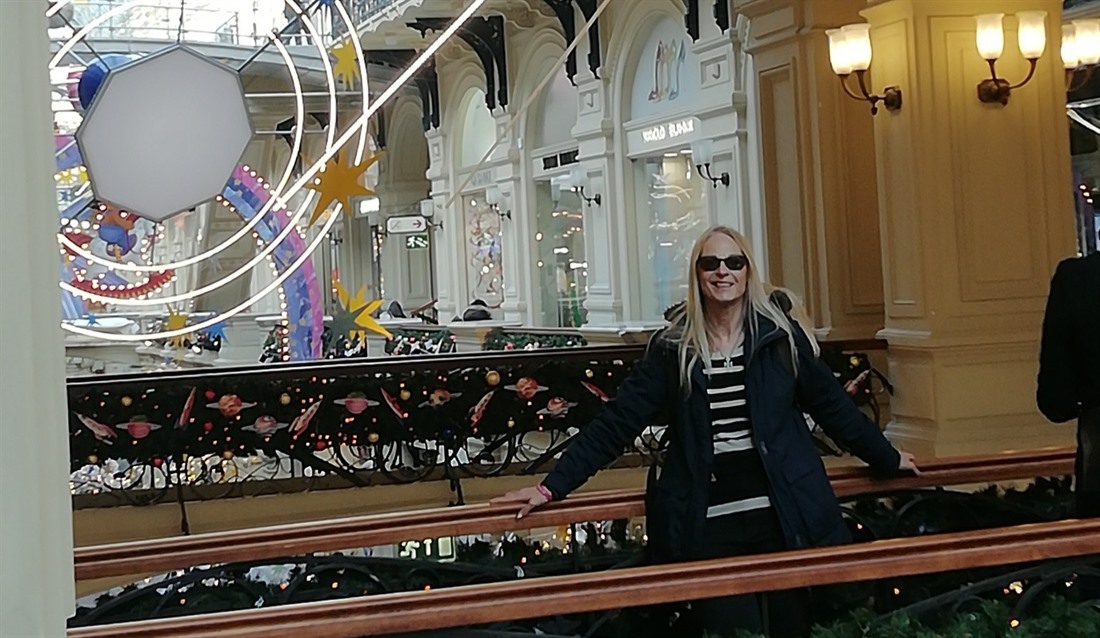 Christina in a glitzy shopping mall in Moscow

Light pollution is obviously not a priority. By night, Moscow positively sparkles with a million ever-changing shades of strobe lighting. A rival to any Chinese metropolis and bordering on Disney-esque. Even more bling is being added with New Year and Christmas decorations. An enormous golden oyster adorned with a glittering blue pearl and sparkling blue dolphin jumping through a golden ring does stretch the imagination as to the connection with either aforementioned festivities. But this is Moscow, whose citizens are determined to dispel any ideas of ‘grey’. It’s all about the bling, the little ones in their designer outfits and mums sporting Gucci studded leather jackets, inevitably accompanied by balding, older men in suits oozing money. Although the average wage is $500 per month, the shops are heaving with youngsters who have no memory of austerity times. With each visit I feel more and more the poor relation. The tables have certainly turned.

Under Putin’s watchful regime there is a palpable atmosphere of pride in the motherland, bordering on arrogance. Cracks in this shiny new world are not apparent. The older generation look back with nostalgia to a time when food tasted ‘real’ and goods were all the more prized after you had queued for two days to get them. Eating out was a very rare occasion and even then it involved lengthy, stomach rumbling lines. Life was certainly simpler with no pressure to impress. Except for the higher echelons of power, all were on an equal footing. The state cared for one from cradle to grave. 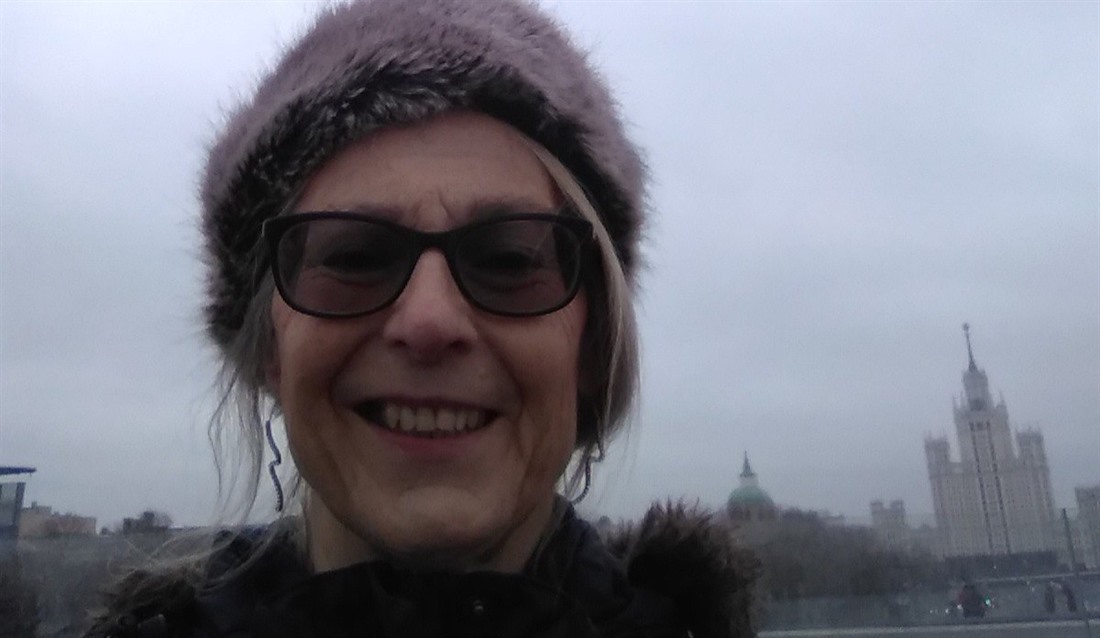 The New Face of Moscow

The New Face of Moscow tour is designed to show off this brave new world. Starting with Zaryadye Park which occupies the former site of the hideous monstrosity - the Hotel Rossiya. After the demolition of the Rossiya, the site lay dormant while much debate went on as to its best replacement. Another 5* deluxe hotel was an obvious choice, but Moscow already has more than enough of these; maybe a shopping and entertainment complex. Again, there are plenty around the city. Accredited to Putin’s almost divine inspiration, a cleverly designed park now occupies this barren site.

Wooden walkways wind amongst beds of plants, grasses and trees from all corners of the country. I did wonder how slippy the paths would be in the snow and ice. Jutting out over the Moscow River is a viewing point perfect for photos of St Basil’s, the Kremlin and the river banks. The park is an oasis of calm from frantic sightseeing or shopping. I was sad to learn that soon after its opening the park and adjoining roof of the exhibition centre had been vandalised. Was the motive against the local council, or Putin? Also located in the park is a simulator, which could be kitsch but is really rather impressive and, for those who do not mind heights or sudden motion, most enjoyable. As the floor drops away you are transported through the air as though hanging from a drone or microlight across the roof tops of Moscow and St Petersburg; over the Lena Pillars; Great Wall of China; Mamaev Monument in Volgograd and Lake Baikal with all the effect of the wind and spray in your face. It was so realistic that you almost felt you had to wave at the dots of people below. At 800 roubles (£10) weekends and 695 roubles (£8) midweek it is not extortionate and something one could easily do without a guide or transfers. It is debatable how long this type of attraction will still seem hi-tech and exciting. I would certainly have another ride.

Heights seemed to be a theme with this New Face of Moscow tour. The cable car which was installed to transport spectators from Sparrow Hills to the renovated stadium used for the 2018 World cup would have been a great ride if the low cloud had not obscured the view, likewise for the panorama from the viewing platform in front of the wonderful Moscow University building. Touching ground level for a change we visited a new food court located almost opposite the Holiday Inn Lesnaya. This former tram station has been converted into a multiplex of eateries from all four corners of the globe. It was heaving with families and trendy, young things so already a popular venue.

Back up in the air to the world’s highest ice cream and highest chocolate factory [eat your heart out Willy Wonka and your glass elevator] situated on the 89th floor of one of a circle of extraordinarily high skyscrapers in the new business district. What is the compulsion to build the world’s highest……? As the cloud had now completely descended over the skyscrapers, had it not been for the best ice cream in the world and pretty good chocolate this would have been a disaster. With the sheets of grey mist outside the windows you could have been on any floor. The local guide did her best to show in 3D on her iPad the different structures surrounding us but who wants to know the height of each in metres and how many floors. Her efforts were further impaired by groups of excited school children running round and round the tower. One of the tower blocks has never been occupied. It has been condemned as unstable. The building is owned by a bank and I couldn’t help wondering who would pay for this enormous faux pas – the architect, engineers, construction company or the bank? At over 60 floors it is not a mistake you can easily hide. Maybe it will become an attraction in its own right.

The New Face of Moscow tour does give the visitor a different perspective but most of it could be done without a guide.

Between the various locations the guide gave us a few nuggets of Russian history. I found it particularly amusing to think of Genghis Khan’s hoards rampaging across Russia with the final goal of conquering Europe only to decide when they reached Hungary that enough was enough. Did his grandson say to this troops "right that’s it lads. I think we have made our point. Time to return home to tend our flocks after all we have been gone 250 years. Sure grandad won’t mind".

5 things you need to see and do in Moscow