5 Of The World's Best Drinks You've Never Heard Of

"The first condition of understanding a foreign country is to drink it,” Rudyard Kipling so nearly said. Nevertheless there are few better or more enjoyable ways of immersing yourself in a different culture than by joining the locals in a convivial and candid conversation over a glass (or bowl) or two of the national tipple. On our travels, Regent Holidays has sampled a vast array of beers, wines, liquors and spirits offered by natives keen for outsiders to gain an authentic taste of their country. While some are surely not intended for human consumption, some have been unforgettably delicious. Here is a small selection of a few of our favourites:

Little is it known but Georgia is the birthplace of wine; no other place in the world can boast a wider variety of grapes than this little corner by the Black Sea, and archaeological evidence suggests wine was being produced here as many as 8,000 years ago! Consequently, the winemaking tradition has been passed down and perfected across generations. And with no laws against home fermenting, you’ll be spoilt for choice by the almost endless variety of delicious, fruity wines unique to the establishment or household you find yourself in.

Made using only the finest grain, purest water and freshest fruit, Hetman vodka was the favoured tipple of the Cossacks (Hetman was the title given to their highest military commander) who ruled here in the 16th century. Its easygoing, pleasant taste (for vodka at least!) has seen the drink sustain its popularity today amongst drinkers-in-the-know, who are all too keen to share its delights with outsiders.

When asked about the secret to his long life, Winston Churchill answered without hesitation, “Don’t be late for lunch, smoke Havana cigars and drink Armenian cognac.” Such was the iconic war leader’s love for the Dvin brand of this world-renowned cognac, he (allegedly) drank a bottle every day until his death at the age of 90. And while Regent Holidays can make no guarantees as to the health benefits of Armenia’s most famous drink, we can certainly vouch for its superb, classy taste. 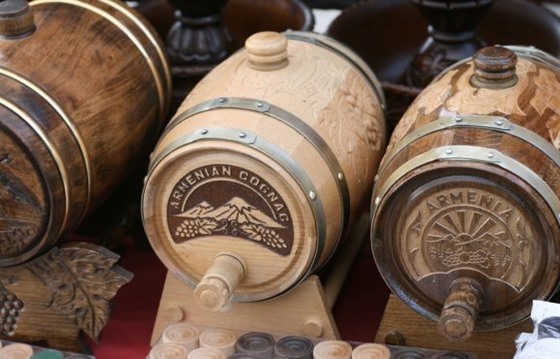 Barrels of Armenian Cognac at a Yerevan market by Arthur Chapman

Albanians are fiercely proud of their national drink and swear by it not just as a beverage to be drunk before, during and after lunch, but also as a panacea for anything from colds to cuts to dizziness. Concocted mainly by fermenting and distilling grapes, but also occasionally using other fruits such as plums, the process is a painstakingly meticulous one as Albanians won’t accept anything but the best. If you find yourself in this particular part of the Balkans you’ll invariably be offered a small glass of Raki at some point – whatever you do don’t refuse, as this can be considered an insult.

After a long journey through the steppe, there is nothing quite like a refreshing bowl of airag – or fermented mare’s milk to you and me. The national drink of Mongolia is a somewhat acquired taste but become accustomed to it and you’ll be rewarded with a pleasant and cooling beverage rich in minerals and vitamins. Again, it is considered terribly impolite to refuse, so ensure to take at least a sip when offered airag by your host.