A journey through the cultural treasures of Armenia

A journey through the cultural treasures of Armenia

“Where exactly is that?” was the typical response from friends and family when I told them I was travelling to Armenia. As I recited a mantra of “it’s just to the east of Turkey, next to Georgia and Azerbaijan”, their faces would light up. “Oh I know…they were in the Eurovision Song Contest weren’t they?”

After my first day in the capital, Yerevan, it became clear that Eurovision was not Armenia’s first or only cultural contribution to the world. From becoming the first country on earth to adopt Christianity as its state religion in around 301 AD, it went on to develop its own unique alphabet, and over the following centuries was at the forefront of artistic and scientific thinking leading to the creation of beautiful manuscripts which today can be viewed in the incredible Matenadaran Museum.

Armenia has had a somewhat turbulent journey since then due to various conflicts with its neighbours, and in fact disappeared completely as an independent republic during Soviet rule for several decades until 1991. But now Armenia is back, a mere 10% of its size compared with its 4th century heyday, but nevertheless left with a rich historical legacy and a proud people.

Armenia’s rich historical and religious legacy – along with the country’s diminutive size – became recurring themes during my six night stay. It has left a wealth of treasures waiting to be explored, many of which are within just a couple of hours of Yerevan. Scenically, the country is absolutely stunning, and it’s the combination of scenery and history which makes it such a beguiling destination.

On the second day of my Highlights of Armenia tour, we headed south along the fertile Ararat Valley towards just two of the country’s countless centuries-old monasteries. The first, Khor Virap, nestles on an outcrop in the shadow of mighty Mount Ararat, the legendary resting place of Noah’s Ark. The mountain actually lies across the border in nearby Turkey, but that hardly mattered given the incredible views of the snow-capped peak from the monastery.

The second monastery, Noravank, enjoys an arguably even more stunning setting, rising as it does above a deep and dramatic gorge, whilst the complex itself was built in the very distinctive architectural style so unique to the country. 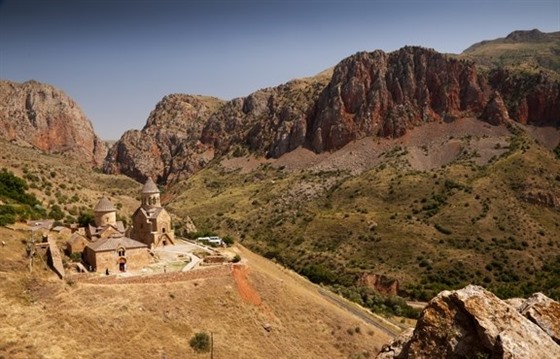 Armenia remains a devoutly Christian country to this day, but religious architecture is by no means its only draw-card. The fruit trees growing in the lush valleys have provided the key ingredients for some wonderfully fresh local dishes as well as wines, and a typical meal will involve a wide range of such dishes to be shared amongst the table. To sample an authentic meal in one of the many unique restaurants – perhaps in a cave or next to a deep gorge whilst listening to Armenian folk music – is a real treat.

The scenery changes considerably at Lake Sevan, a vast high altitude lake surrounded by forests. In a landlocked country such as this, parts of the lakeshore have developed a kind of resort-like atmosphere, but a short walk is enough to escape from the crowds. 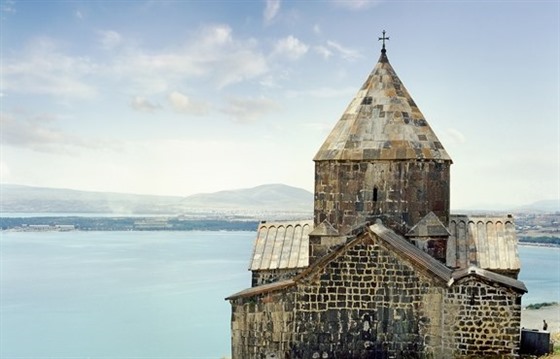 On the Sunday morning we headed to the religious capital of Armenia, Ejmiatsin, to participate in the Sunday Mass. For those of any religion – or even of no religion – it is an amazing experience to be able to witness the ceremonial aspect of the service and in particular to listen to the profoundly beautiful liturgical music. I stood in awe as about a dozen priests chanted in melancholy tones without any musical accompaniment except for the tolling of a lone bell. Every so often, this would be interspersed with the most incredibly joyous verses sung by an all-female choir, seemingly building up to an ethereal climax yet never quite reaching it. As the Catholicos – the head of the Armenian Church – walked down the aisle blessing the devoted worshipers, whilst the choir sang and the smell of incense filled the building, it was impossible not to feel rather moved.

The pace changed considerably in the afternoon as we made our way to Yerevan’s huge open air weekend market known as Vernissage. This is by far the best place to come for handicrafts, carpets and souvenirs made by local craftsmen, and it could easily take a couple of hours to see everything and to take in the wonderful atmosphere.

On the following – and my final – day, there was the opportunity to explore more of Armenia’s capital. There are plenty of good museums to occupy several days, but due to limited time (and the fact that most of them are closed on Mondays) I decided to spend the day simply wandering around the city. In the late afternoon, I made my way to the top of the 500 or so steps of the Cascade complex. As the hot sun dipped towards the horizon, Mount Ararat emerged from the haze and loomed large over the city streets and their many Soviet-era buildings. Finally, the sun set and the light illuminating the snow-capped peak was turned out. 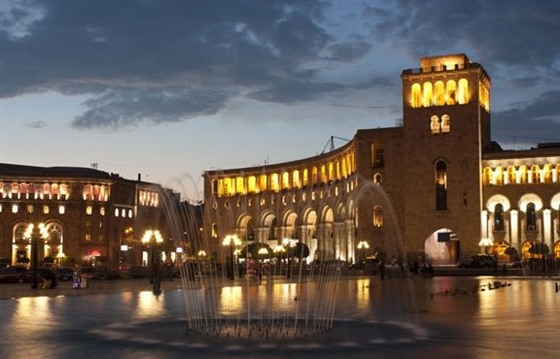 I then made way down to the very heart of Yerevan, Republic Square, where at 9pm a dazzling fountain show captivates the crowds. The illuminated fountains dance to a soundtrack ranging from the Star Wars theme to Strauss, and this seems to have become a Yerevan institution given the volume of families, couples and tourists who come out in force to watch. The grand finale of the show on my very last night was, fittingly, the beautiful version of ‘Time to Say Goodbye’ by Sarah Brightman and Andrea Bocelli. It felt as if Armenia was giving me as warm a farewell as it had welcomed me with.

Click here to explore our full collection of Armenia holidays