A journey to Turkmenistan - a country of imagination

A journey to Turkmenistan - a country of imagination

Regent Holiday’s client Murray Scott travelled with us to Turkmenistan. Here, he writes about the highlights of his trip…

The drive into the city centre of Ashgabat (‘the city of love’) was something different. We were not prepared for the intense concentration of white marble buildings that shone in the bright sunlight, many were topped with gold domes and the green flag of Turkmenistan adorned their many flag poles. Giant fountains, epic monuments, shaded parks and gold statues of the former President Saparmurat Niyazov, known as Turkmenbasi – Father of all Turkmen punctuated the empty spaces. The long straight roads going into the city centre were lined with white and gold street lights and well tended flower beds. An army of workers were actively sweeping the public areas and roadside kerbs with brush brooms and the many police along the way were keeping a watchful eye on the passing traffic. In the distance the Kopet Dag Mountains, the border with Iran, could be seen through the haze. Welcome to Ashgabat the quirky capital of Turkmenistan.

The city, which is surrounded by the Kara Kum desert, was almost totally destroyed by an earthquake in 1948 – 175,000 of its citizens perished but now Turkmenistan is enjoying a huge revival, due to its significant energy reserves. Everywhere there are constant reminders that the city is undergoing change; a new airport, an Olympic style sporting complex and more blocks of luxury accommodation is being built. It is no surprise that Turkmenistan has imported more white marble from Italy and Turkey over the past ten years than of any other country.

Drivers are fined if they enter the city centre with a dirty car, smoking is banned in public places, photography is not encouraged and you will be under the watchful eye of the many police that are present in the city.
Turkmenistan is a reclusive country that has borders with The Caspian Sea, Kazakhstan, Uzbekistan, Afghanistan and Iran. Religion is important but it is not taught in schools, madrassa schools are banned and women are not allowed to wear the burqa or niqab in public. Shia and Sunni Muslims live in harmony with the minority Russian Orthodox Christians.

Turkmenistan has a very rich history, due partly to having a pivotal position on the fabled Silk Road. We were very fortunate to have visited some important UNESCO listed sites, namely the Parthian capital at Nissa, the Kutlug Timur Minaret (the tallest structure on earth in the 14th century) and the partially ruined Turabeg Khanum Mausoleum at Gurganj, the Bronze Age ruins of an ancient civilization north of the city of Mary and the ancient city of Merv. 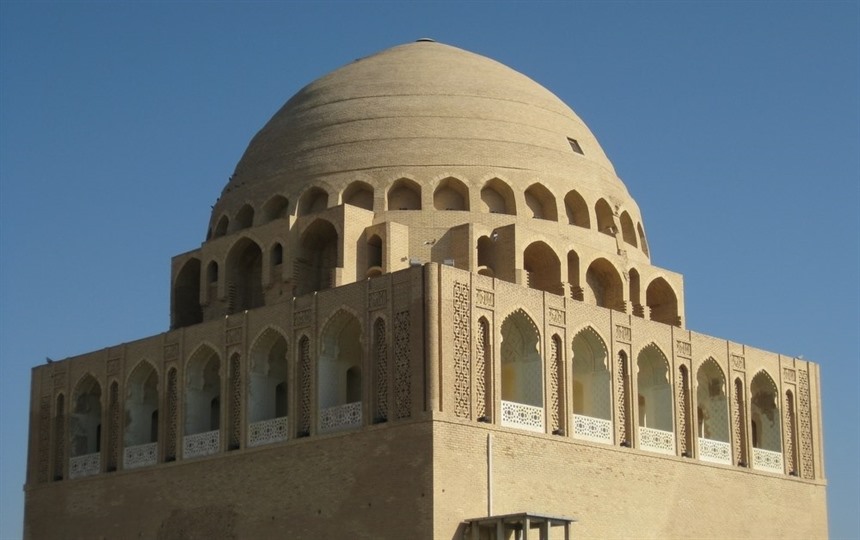 It was the ruins of Merv that must surely stand out against all others. Merv was a major city, situated near to the Merghab River. The site is vast and remote, there were very few tourists. The city was the largest in the world around the 12th century, with over 1,000,000 inhabitants, a major trading post on the Silk Road. The Greeks, Persians, Parthians, Romans, Arabians (Islam’s), Turks, Seljuk’s, and others, occupied the city from the 6th century BC up until Genghis Khan’s son Tolui laid waste to Merv in 1221. Merv never recovered and its ruins, now, stand alone reminding us of its past. Like a number of sites in Turkmenistan you were left to imagine how life might have been in these turbulent times. There are a number of interesting structures that can be seen but the most dramatic is the clay fortress of Great Gyzgala. It is rumoured that dozens of girls, hand in hand, jumped from its corrugated clay walls to escape the marauding Mongols. Merv has been granted the status of a World Heritage site by UNESCO.

We took the long four hour drive into the Kara Kum (Black Sand) desert to visit the ‘Door to Hell’ that is situated near to Derweze.  The Kara Kum desert covers much of Turkmenistan and is crossed by the Kara Kum Canal, the second longest irrigation channel in the world.  The desert is vast and its dry beige prickly scrub was in contrast to the vivid red colour of the country’s National flower, the poppy.  The ‘Door to Hell’ is a massive hole in the ground that has been burning gas since 1971, after a Soviet engineer inadvertently ignited it.  This amazing spectable is best seen after dark, so a night spent out, under the stars, in the desert is an  experience that was well worth the effort. We were on our own, other than a couple of Japanese tourists and five Dutch cyclists, to witness this spectacle. 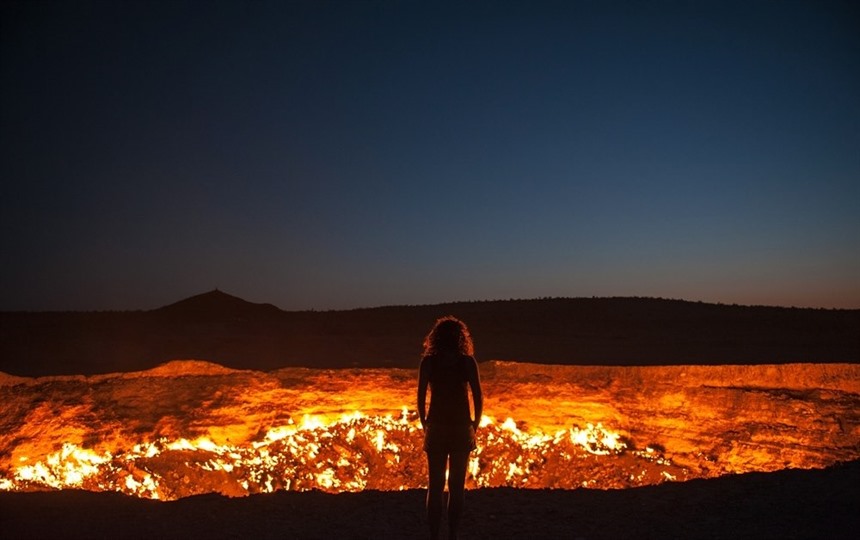 Turkmenistan holds a pivotal position in Central Asia and its access to the Caspian Sea is important. The Caspian Sea is the largest inland body of water in the world and the port of Turkmenbasy (Krasnovodsk) serves as a major sea and railway link to Europe and Asia. It is here that the Trans Caspian Railway starts its journey to Samarkand, Bukhara and onwards to China.

We spent a night in the Awaza National Tourist Zone, close to the city. This purpose built holiday complex is still under construction and there seemed as if there was no shortage of money. The entrance to the complex was marked by a huge flag and the customary portrait of the current leader Gurbanguly Berdimuhamedow. The road leading to the resort had the usual line of white and gold street lights and thousands of newly planted pine trees; a number of women, masked with tight scarves to protect their faces against the fierce sun, were out sweeping along the kerbs with their customary broom brushes. Our hotel could rival what might be expected in Dubai but we were on our own, the only tourists ‘in town’. At US$50 a night for bed and breakfast it seemed a bargain. There was no one around to enjoy the empty beaches and the setting sun but this should not have come to us as a surprise as only 6,500 tourist visas, worldwide, were issued to enter Turkmenistan in 2012.

We left Turkmenbasy the following morning, driving up through the gorge that was dug by the many Japanese conscripts who were taken here during the 2nd World War. Most of these prisoners never returned home and the neglected graveyard on the outskirts of the city serves as a reminder of their fate. It was a very hot day as we drove to the Soviet city of Balkanabat, situated beneath the dry and imposing massif known as Big Balkan. Balkanabat is laid out in a grid pattern and has may reminders of its Soviet past including various well preserved murals, the memorial to Soviet soldiers killed in the Great Patriotic War and the imposing statue
‘The Monument to the builders of Nebit Dag’, a commemoration to the desert explorers who first discovered oil in the region.

We spent the night in a Soviet hotel; the local families were out in the many parks until late, enjoying the cool evening temperatures. The following day we were back on the road continuing our long drive to Ashgabat. We were constantly being buffeted by swirling sand that was being blown in off the desert by the strong wind, often shrouding the odd shepherd who was tending to his sheep. There was the endless stream of Turkish, Iranian and Turkmen lorries, carrying heavy loads of construction material, heading for the capital. The numerous camels, ever present, along the way, seemed oblivious to the passing traffic. The Transcaspian Railway and the Kopet Dag mountains, to our right, were never far away.

We stopped at the historical railway town of Gokdepe, the site of a famous battle in 1881 when the Russian Empire, under General Skobelev defeated the Turkmens and as a consequence Turkmenistan lost its independence. The blue domed 1994 Saparmurat Haji Mosque was built in commemoration to this battle and to the many thousands of Turkmen soldiers who died.

The Akhal-Teke Stud Farm near to this historical railway town is dedicated to the survival of this elegant desert-bred horse that is ingrained in Turkmenistan’s culture and folklore. There are less than 3,000 of these horses existing worldwide and it was a pleasure to spend a late sunny afternoon under the shade of trees admiring these beautiful animals.

A few kilometres outside Ashgabat we visited the, gold domed, Gypjak (Ruhy) Mosque, completed in 2004, the largest Mosque in Central Asia. The Mosque was built for Saparmurat Niyazov – Turkmenbashy who died in 2006, with a tomb, in preparation for his death. Turkmenbashy, his mother, father and two brothers are now buried here, in a mausoleum next to the Mosque. It had been a long and very interesting day when we returned to our hotel in Ashgabat.

Ashgabat is a remarkable and unique city. The city’s stunning architecture, of white marble, is beautiful but extravagant. Ashgabat leaves you with a vivid impression. The skyline is simply bizarre. The Alem Entertainment Centre (The world’s largest enclosed Ferris wheel), the Arch of Neutrality (topped with a gold statue of Saparmurat Niyazov), the National Press building, the Giant Thermometer, the Wedding Palace, the Puppet Theatre, the Ruhnama Monument (the book of the Soul) and Constitution Monument are but a few. Unfortunately it was difficult to take photographs of the impressive ‘gold’ statues of ‘The Great President’ that are to be found outside the Presidential Palace.

Turkmenistan is surrounded by conflict but it seems to have stability amongst its citizens. The people were friendly and inquisitive. There were very few tourists and it is unlikely that this will change in the near future. Tourism is not encouraged. The museums and lavish hotels were empty. Beautiful Russian churches and Mosques stand together.

I was not surprised when we departed that the airport was empty, the small duty free shop closed early and our return flight on Turkmenistan Airways was less than a quarter full, the other passengers being a few Sikhs returning home from Amritsar. The flight path followed the coast line northwards along the Caspian Sea and it was then that you really did appreciate an immense area of emptiness.

I had a most interesting and enjoyable stay in Turkmenistan.

Click here to explore our full collection of Turkmenistan holidays