The only restaurant in the UK where you can try some Icelandic cooking.

This is my second encounter with an Icelandic volcano. The first was sat in an airport while Eyjafjallajökull rained fire and smoke across Northern Europe and grounded the continent’s planes. The second is more satisfying. In proof revenge can be sweet or savoury, I’m tucking into lava salt. I’m eating a volcano. With the consistency of gunpowder and about the same bite, the lava salt and sour dough bread starter at Texture is a glimpse of what’s to come – bold, but never extravagant, Nordic cooking with flashes of Icelandic inspiration. 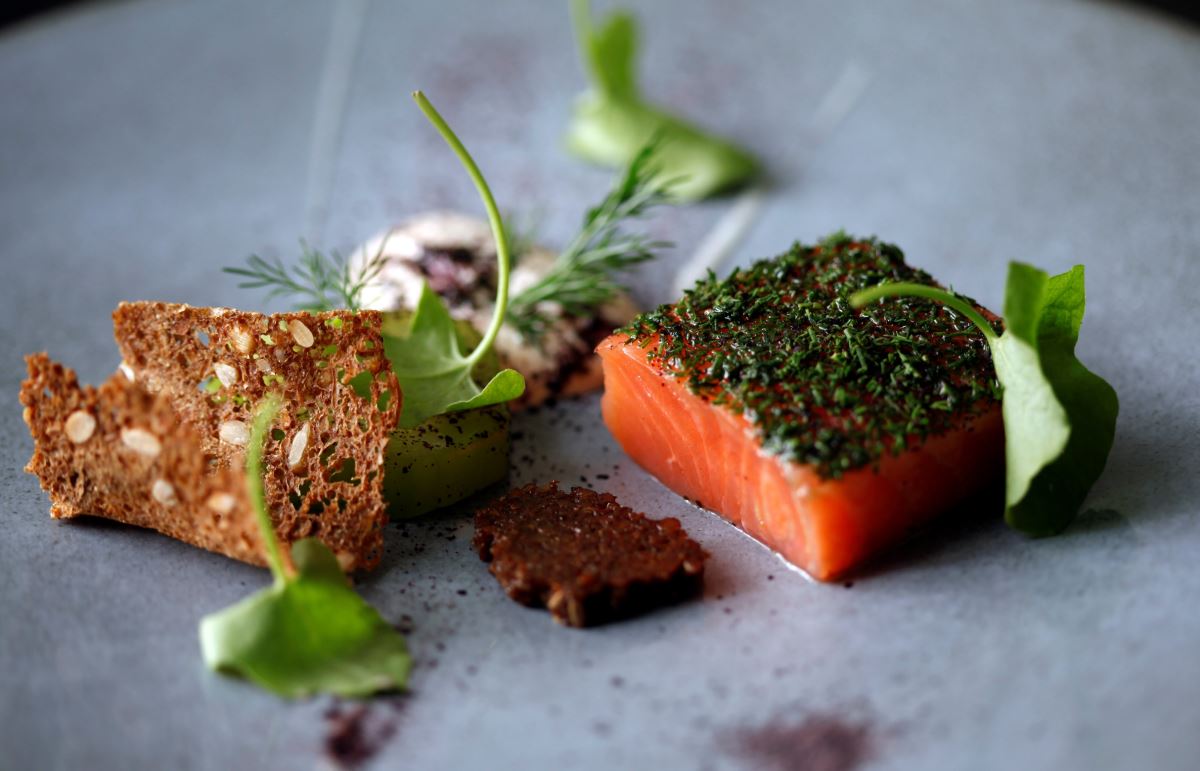 From a first glance you might not notice the Icelandic touches at Texture. Hidden inside a Georgian townhouse, the English exterior gives way to an urbane and grown-up interior of metallic lamps and smart brown lounge chairs. But from the glass cabinet stuffed with driftwood, to the discreet bottle of Brennivin stowed behind the bar, the hints are there, before paintings of lava erupting in the main dining room give the game away.

The menu here leans heavily on fish, although lamb and suckling pig also make an appearance. The pick of my starters from the tasting menu, (after I’ve reluctantly released the bowl of lava salt), is a collection of soft pink, red and yellow Lancaster heritage beetroot. Earthy, sweet and soft the crumbly texture of the goats’ cheese that they’re served with is every bit as satisfying as the balance of sharpness it adds.

Unsurprisingly, given the name, texture has been given as much thought as flavour by the kitchen. The crackling skin of roasted succulent pork belly is twinned with a smooth, tart apple purée and crispier strands of red cabbage, while gently smoked salmon fillet is paired with the crunch of diced green apple and laced with a hit of wasabi – each bite not only offers a new flavour but differing consistency and a slightly different experience.

The cod, the highlight of any Icelandic menu, is reliably brilliant. The barely beans bring balance to the texture, while the almonds and capers mixed in give it an earthy, licked with flame flavour that lasts. Almonds, capers and glasses of Chardonnay confirm that the Icelandic connection only runs so deep.

Chef Agnar Sverrisson tells me ‘I think it would be very difficult to run an Icelandic restaurant in London or to offer any traditional Icelandic dish. We have a much greater influx of different cultures here, and that’s what defines the food culture. My menu blends modern European food with Scandinavian influences and the best in British produce. But I do use some fantastic Icelandic ingredients, such as lamb, cod, langoustines, skyr and seaweed.’

If there is a definitively Icelandic dish, it’s found on the dessert menu. Skyr is a national obsession in Iceland – a thick yogurt-like soft cheese that locals consider close to super food. At Texture it comes served on a bed of crumbled rye oats – fold these into the creamy Skyr for a sweet crunch. A little like the restaurant itself, it’s light, subtle but full of flavour.

Type Icelandic restaurant UK into Google and Texture isn’t just the number one result, it’s the only result. They may not be flying the Icelandic flag from the roof or slicing up shark in the kitchen, but the dishes at Texture are a sympathetic and nuanced introduction to the best bits of Icelandic cooking. And they have volcanoes on the wall.

How much: Despite the Michelin star over the door, prices at Texture are reasonable. Mains start at £30 and a full dinner will stretch to around £80 with wine. The set menu at lunch offers the best value with three courses for £33.

In Conversation with the Chef 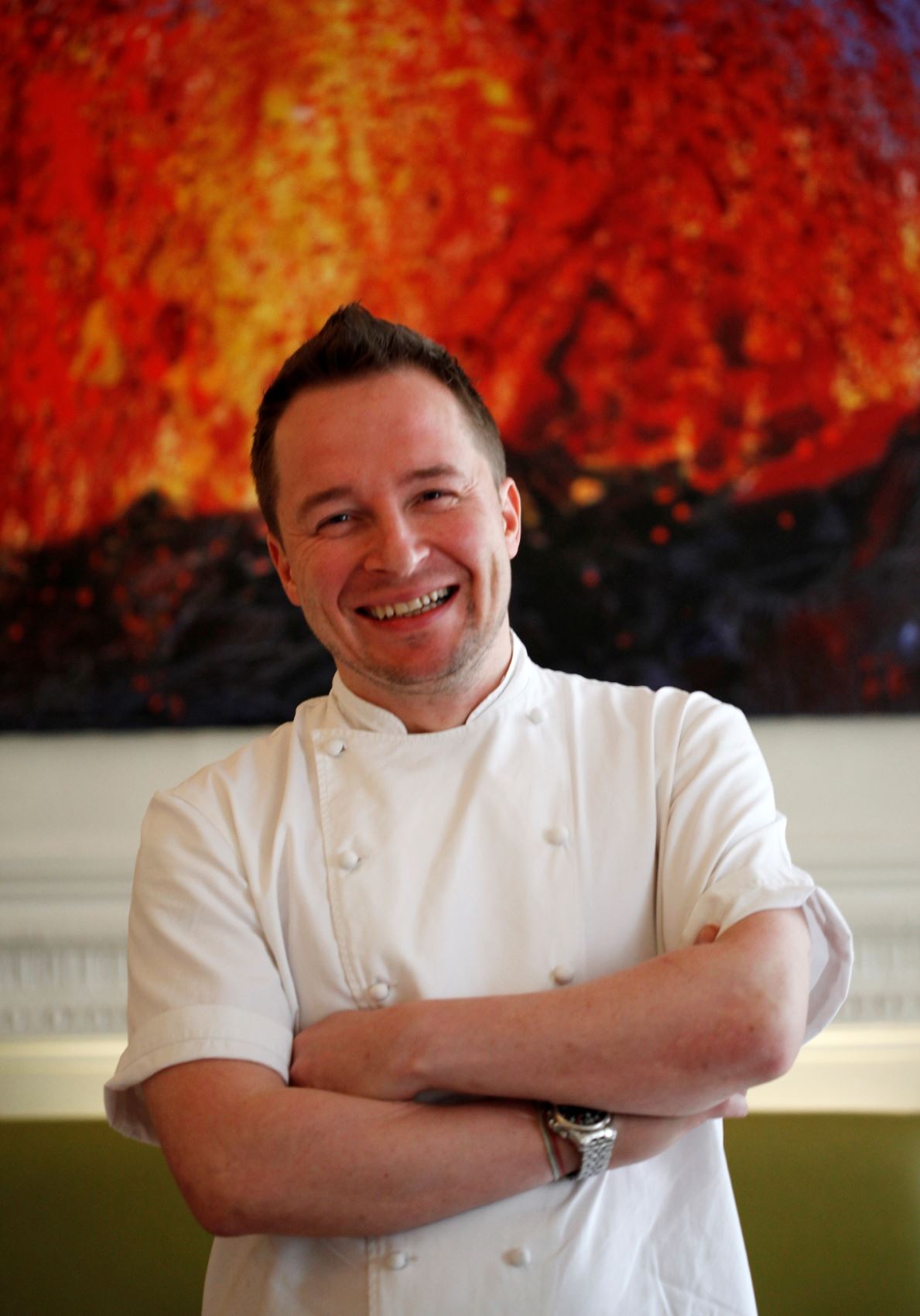 One dish to try in your restaurant, and why?
Anjou pigeon, which is our signature dish and has been on the menu from day one.
The one dish you always eat when you go home?
Icelandic fish stew, (plokkfiskur).
If you could eat at only one restaurant in Iceland, which one would it be?
Lava restaurant. It has stunning views over the Blue Lagoon and the food showcases the wild spirit of Icelandic nature.
Your favourite place in Iceland and why?
Blue Lagoon. Because it’s set in the pure heart of the Icelandic landscape and it offers a quite unique experience and opportunity to energise, relax and forget the stress.

Click here to explore our full range of Iceland holidays