Back in the USSR - A Pioneering journey through Kazakhstan

Back in the USSR - A Pioneering journey through Kazakhstan

What kind of person goes on holiday to visit a former USSR nuclear test site?  Well, a Regent Holidays client, of course. And that’s exactly what 16 of them did. Led by Mike Voss, Regent’s Asia Travel Specialist, a pioneering group of individuals set off to uncover the intriguing Soviet past of Kazakhstan, all the way from the modern city of Astana to Semipalatinsk, the USSR nuclear deterrent testing site. Mike shares his experiences… 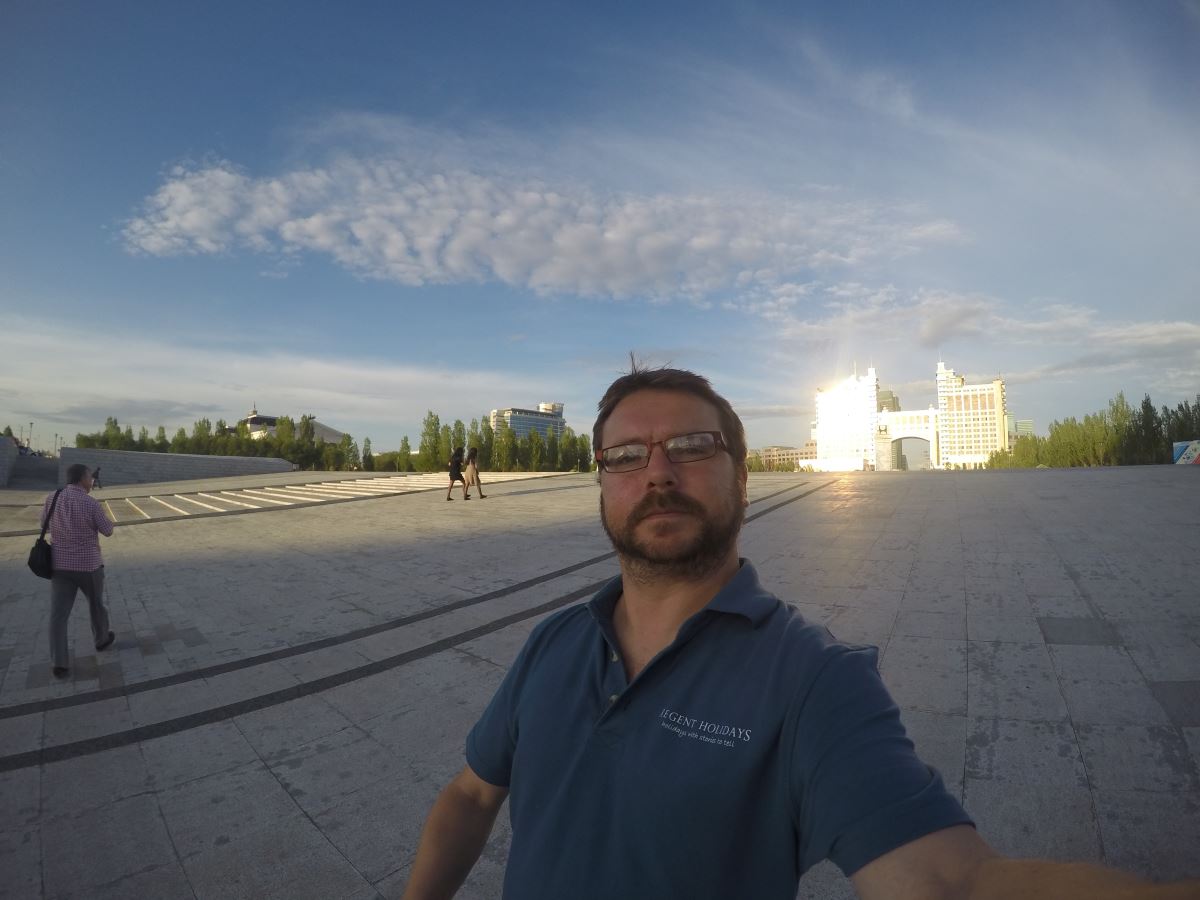 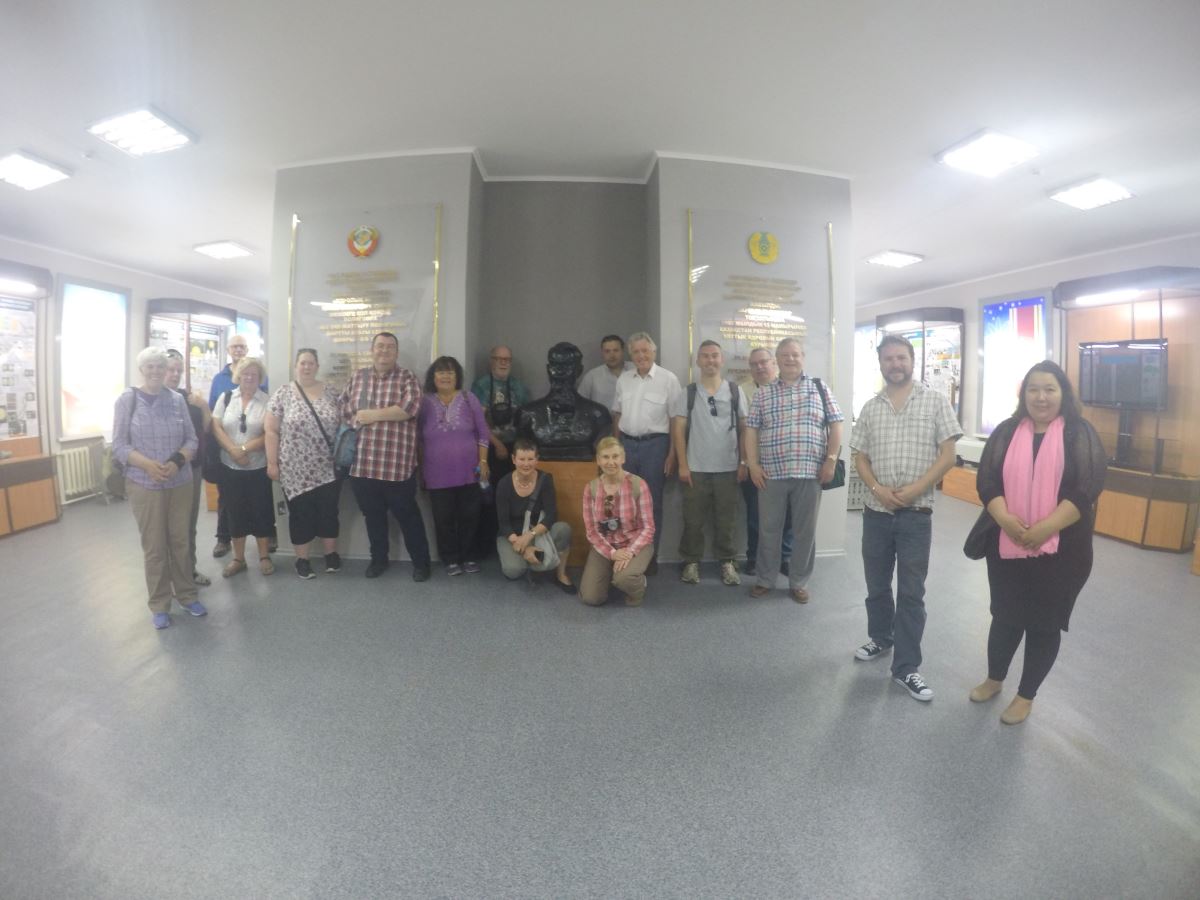 Having spent our first day visiting the main sites of the ‘old’ town of Astana, Kazakhstan’s futuristic new capital city, our group of 16 intrepid souls climbed aboard the tour bus and set off across the steppe. Our journey took us into the north-eastern corner of the country and to the formerly-closed town of Kurchatov, home to the USSR’s nuclear test programme from 1947 to 1989.

A total of 13 hours on a somewhat mixed standard of roads really gives you a sense of the scale of the ninth-biggest country in the world. The grasslands scroll past the windows, the scenery punctuated by the odd group of horses or cemetery, but not much else.  We stopped at truck stops to use the facilities and top-up on tea and reached the town of Aksu for “lunch” at 6pm. 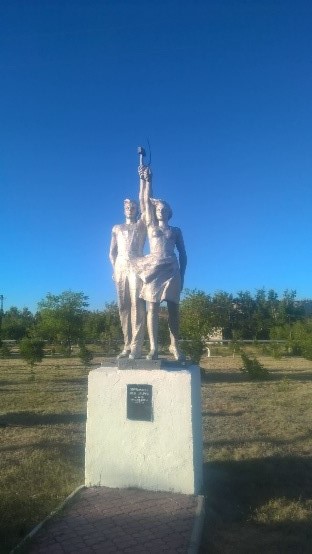 We had a post-lunch stroll around the park with statues of Lenin and other dignitaries, and the famous ‘Worker and Kolkhoz Woman’ statue by Mukhina. Here we were met by some local teenagers who wondered what we were doing in their town – slightly bemused as to why tourists would be visiting.

Arriving in Kurchatov at around 11pm, it was hard to get a feel for this once-closed town at night. Now named after the father of the Soviet nuclear programme, in its heyday this area was simply known by its postcode. Walking around the following morning, we eyed-up a mixture of derelict structures (including the former KGB headquarters) and grand civic buildings standing as proudly today as the must have done in the 1960s and 1970s.

We visited the museum of the USSR nuclear test site where we spent a fascinating hour learning about the history and legacy of the tests. Housed in the former administrative building where Kurchatov carried out his work, the exhibit was a fascinating mix of scientific experiments and sad tales of human suffering.

Next we boarded the shuttle bus, heading into the test site itself. Our first stop after about an hour or so was at one of the many concrete instrument towers, dotted across the site like sharks-fins rising from the ground.  I took a photo of one that had been, appropriately, daubed with a copy of Edvard Munsch’s “Scream” by an Almaty artist. 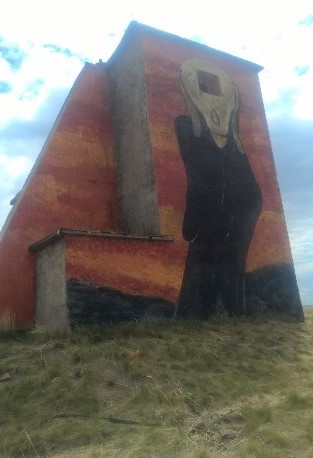 Before we headed further into the epicentre of the first test in 1949, we were issued with our protective suits and respirators.  Oddly the crater created by this test seemed to be the most verdant spot in the whole site, with horses grazing nearby and birds swooping overhead. Our guide with his dosimeter assured us that we would have to stay for 400 hours to reach the same exposure level as an x-ray, but nonetheless there was something quietly powerful thinking about what had happened here all those years ago.

We continued from this spot to a bunker which had been built with a mock-up underground station and train tracks to test the effect of a nuclear explosion on Moscow’s metro system.  It was rather eerie in this cool, concrete chamber with cracks in the walls and graffiti scrawled everywhere – despite its location it seems that some locals must still come out here for some solace, and judging by the detritus, a couple of beers and some vodka shots.

We travelled back to Kurchatov after a visit to a lake in a crater left over from a test to see whether TNT was as effective as a nuclear explosion (it was not). After we all went through a process of ‘decontamination’ (i.e. heading back to the hotel for a shower) we continued our journey via the ghost-town of Chagan, abandoned since the closure of the nearby Russian airforce base.

We reach Semey, from where the Semipalatinsk test sites gets its name, and the town to which Dostoevsky was sent in exile.  The town is also home to a monument to the victims of the nuclear tests, a stirring tower of stone with a mushroom cloud towering over a mother protecting her young child. Personally, I found the visit to the area to be of both immense scientific and historic interest, but also profoundly moving in terms of the impact the nuclear arms race had on mankind, and the very direct effects that this had on the local population who had had no say on the tests that took place on the usually serene Kazakh steppe.

Click here to explore our full collection of Kazakhstan holidays