In true Regent Holidays’ style, 2016 saw us launch tours to a place that truly characterises the title ‘alternative destination’.  Abkhazia – it’s okay if you’ve never heard of it before – is a breakaway state to the west of Georgia and is rarely ever visited by western tourists. At all. But that’s why we HAD to send our Travel Specialist Carl Meadows. After spending a week exploring beautiful swathes of untouched forest and discovering ex-soviet historical remnants, Carl shares his experiences of Tkvarcheli, the place that had the most impact on him.

I must admit, until arriving in Abkhazia I had never heard of the town of Tkvarcheli, but of all the places I saw on my memorable travels around the self-declared Republic of Abkhazia, my visit to this small town has stuck with me. Back in the 1990’s I was enjoying school life, living safely in sleepy, leafy suburbia. But at the far flung edge of Europe a dreadful conflict was taking place; the War in Abkhazia. For some reason, when I think of war I think of World War 2, of Korea, of Vietnam and such – always conflicts from before I was born; I don’t think of something that happened whilst I was in my youth. And who can blame me for that – I don’t think the war in Abkhazia got much mention here at the time. It still doesn’t today. 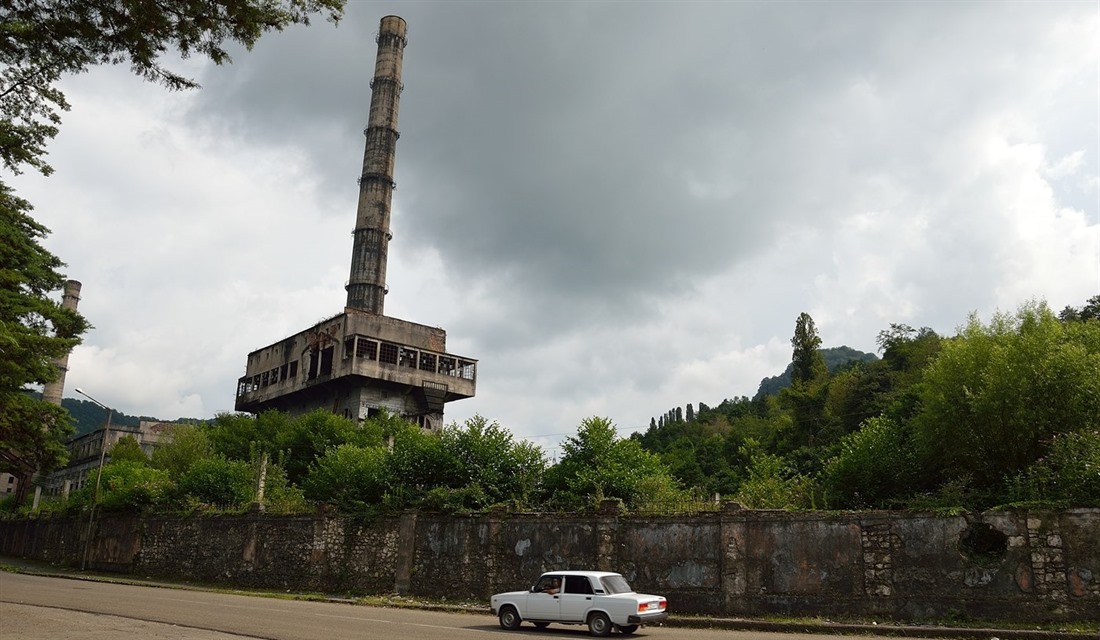 During the civil war that resulted in Abkhazia declaring itself independent from Georgia, Tkvarcheli was under siege by the National Guard of Georgia for almost a year. At the time this mining town had a population of over 20,000 people, with an ethnic mix of Abkhaz, Russians and Georgians. With the town’s power plant being bombed in the first days of the siege the town lived without electricity, and the severe humanitarian crisis would have been far worse if the Russian military had not been regularly flying in helicopters laden with food, medicine and provisions. Shelling, bombings, snipers – it truly was a horrific period in Abkhazia’s history, and one that is only a footnote in history.

Walking the streets of Tkvarcheli in the present day, the only comparison I can draw is with Chernobyl; a small population, eerily quiet, and crumbling, near empty buildings. Today, Tkvarcheli has a population of around 5,000 people rattling around in a settlement built for over four times that number. The majority of the industry is long-abandoned and now derelict, but Tkvarcheli soldiers on. Small-scale mining does take place, but the town, awarded title of Hero City in 2008, is a crumbling and bleak reminder of the chaos born from the collapse of the USSR. 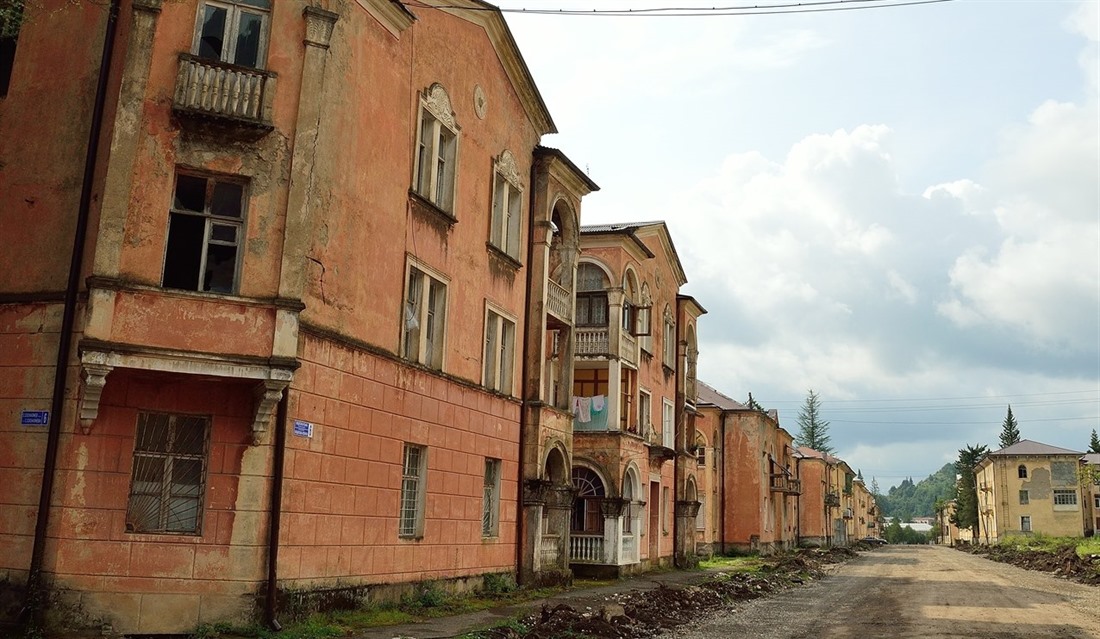 A few bemused but very welcoming elderly gentlemen sat outside the only eatery we could find in town. As we tucked into a delicious Abkhaz meal, washed down with homemade rosé, we chatted with them briefly, a short respite from the rather intense game of chess two of them were playing. “Angliiskii!” (English!) they exclaimed, somewhat taken aback to discover where I was from. Looking me up and down before shaking my hand, smiling and offering me a cigarette, which I politely declined, we had a stilted conversation through my translator.  “They thought you were from Ukraine,” said my guide. As to what this Englishman was doing in a town that almost nobody ever visits, in a country that almost nobody ever visits, was of interest to them.

(Tourists?) they said, in surprise, after my guide had explained that I wanted to start bringing tour groups to Abkhazia. “Do you really think English tourists will come here, to our city – to our country?” my guide translated. I went on to explain, not needing to be at all diplomatic because everything I said was true, that their country, Abkhazia was fascinating; welcoming people, beautiful scenery, delicious food, wine by the bucket and a rich, albeit tumultuous history. They nodded in approval. We chatted on for a few minutes, sharing a quick glass of the aforementioned rosé before my guide reminded me we had to get a move on – it was my last day in Abkhazia and I had to get to the Georgian frontier before the border closed for the day. 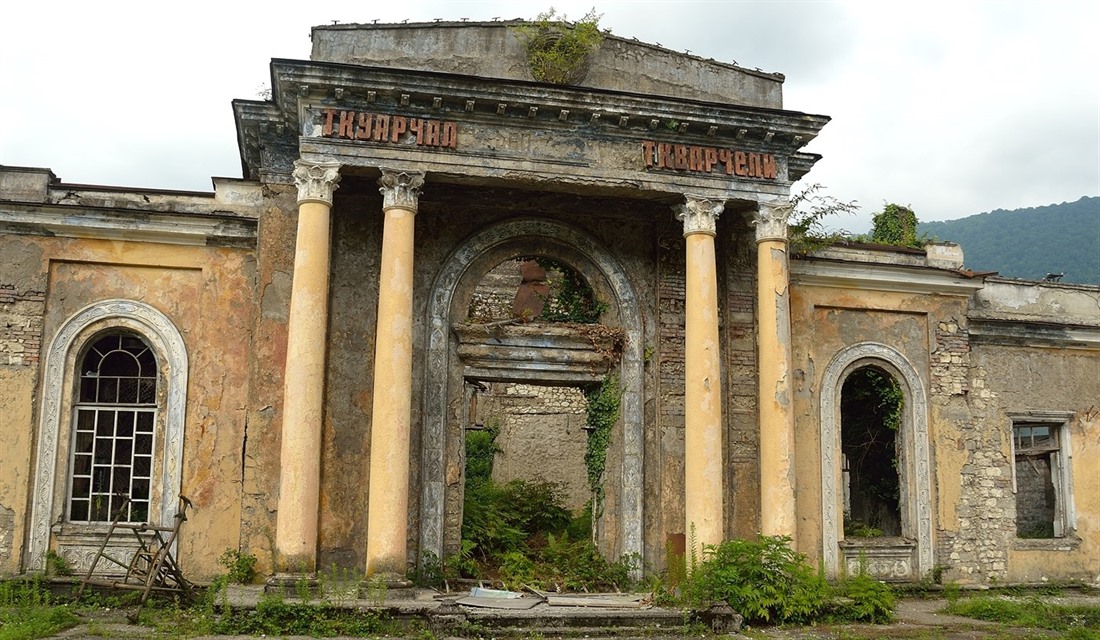 Driving out of town we stopped at the long defunct train station. What must have once been an attractive building is now just another relic from the war – no rolling stock has come this way in years. Above the station’s central arch “Tkvarcheli” was once written in Abkhaz, Russian and Georgian script; at some point somebody has gone to the trouble to scale the building and remove the Georgian lettering, such is the disdain for the Georgians in Abkhazia. Leaving town, we pulled up to a middle-aged couple cradling a baby. They were standing at a bus stop which, despite its appearance, apparently still served its primary function. We offered them a ride as we were heading the same way and, it transpired, hitchhiking in these areas is common. Dropping them off in Gali, the last significant settlement before the border they wished me luck, “be careful of those Georgians!” my guide translated. Funny, the last thing I was told in Georgia before arriving here a week ago was almost exactly the same – “be careful of those Abkhazians!”

To secure your space on our very first Pioneering Abkhazia Group Tour with Carl, click to find out more.