Trans-Siberian On The Tsar's Gold

Trans-Siberian On The Tsar's Gold 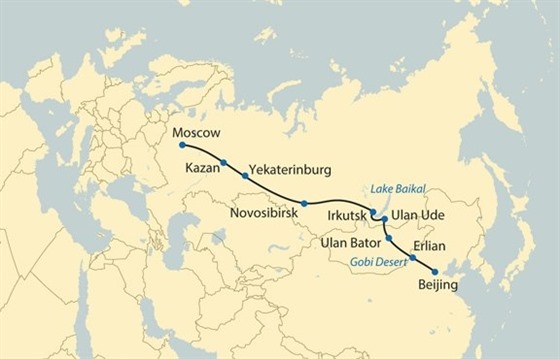 Trans-Siberian Map – Moscow to Beijing on the Tsar’s Gold

For many, it’s the greatest railway journey you can take. The idea of travelling thousands of miles and crossing seven time zones appeals to the romantic element in our wanderlust. People derive different things from the journey. Some want to experience the vastness of the world’s largest country and watch the mesmerisingly immense taiga of endless trees roll past the window. Others welcome the enforced break from iPhone and keyboard and the chance to think and dream, or finally read War and Peace. 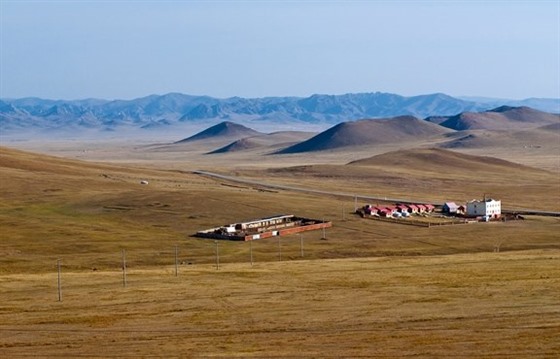 The vast expanse of the Mongolian steppe

But most would agree that seven nights non-stop is too much for most travellers, so the best way to experience the Trans-Siberian is to stop en route for off-train excursions. Many choose to travel by the main service train and chink glasses of vodka with the locals, but for a touch of luxury take the air-conditioned Tsar’s Gold private train, which accommodates up to 200 people and includes visits to many of the most important and attractive sights along the way. It has four restaurant cars serving Russian and international cuisine, and they become lounge and bar cars after dinner, for which informal dress is the norm. Like all such tourist trains, the atmosphere among the international guests is convivial and a great way to meet others and gain ideas for future holidays. 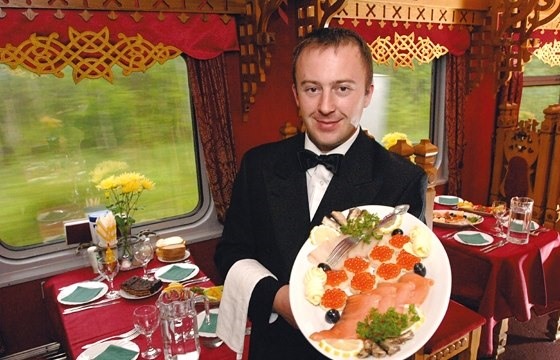 There are four categories of accommodation: Standard Plus and Nostalgic Comfort carriages have shared facilities, while Bolshoi and larger Bolshoi Platinum cabins are en suite with a shower, lavatory and washbasin. Both Bolshoi cabins have upper and lower berths and include towels, bathrobes and slippers. Nostalgic Comfort evokes a retro feel of the 1950s, refurbished with a comfortable armchair and a hand-held shower compartment shared between adjoining cabins. Standard Class, with three levels of cabin, all have two lower berths and different standards of appointments. Each car has two attendants. 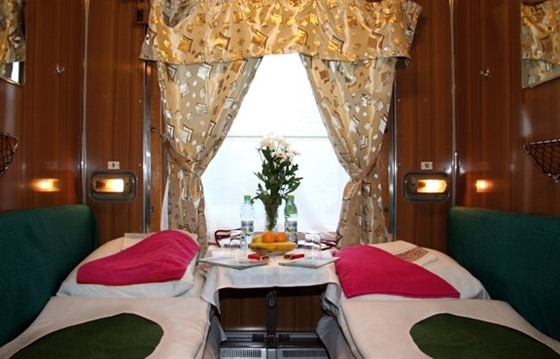 After leaving Moscow, the first stop is the wonderful city of Kazan. Its vast Tatar fortress is a World Heritage Site, ringed by 2km of whitewashed walls punctuated by cylindrical towers with conical roofs. Within the walls is Ivan the Terrible’s cathedral which has 150 different images of the Mother of God, differentiated by colour and expression. It also has a bizarre 17th-century seven-stage tower built on wooden foundations that now leans by 6 feet, spoken of with pride as something to compare with a well-known treasure of Italy. Off-train tours are led by knowledgeable and entertaining guides who each lead a maximum of 26 people. 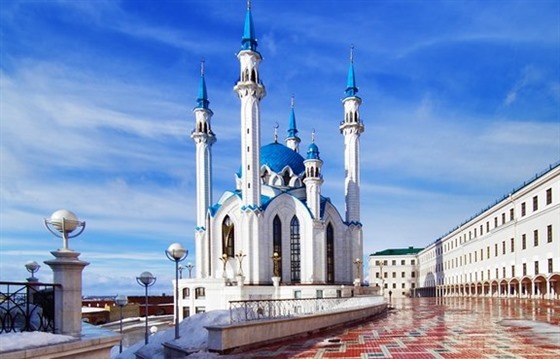 Russia’s fourth largest city of Yekaterinburg will be forever associated with the murder of the former Tsar Nicholas II and his family in July 1918 in the mansion of an engineer named Ipatiev. The imposing church built on the site of the Ipatiev House was consecrated in 2003 and has become a place of pilgrimage for many Russians and the focus of the visit. 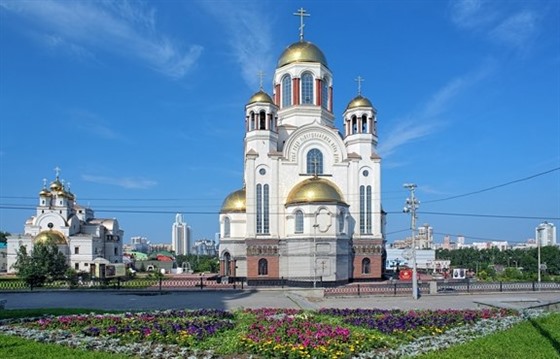 Founded as recently as 1893, Novosibirsk is today Russia’s third largest city where the off-train tour is welcomed in traditional style with bread and salt before seeing the mighty Ob River and the museum about the epic story of the Trans-Siberian Railway’s construction. 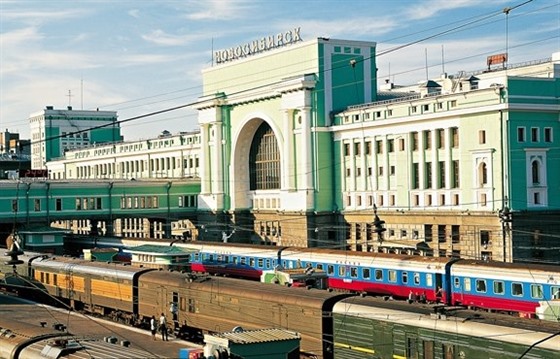 Novosibirsk Train Station, Russia
A walking tour of the city of Krasnoyarsk helps work up an appetite for the train chefs’ evening Tsar’s Feast, naturally involving caviar and vodka. The Russian author Chekhov thought Krasnoyarsk the most beautiful city in Siberia, and the old town on the terraced hill contains the restored Annunciation Cathedral of 1802–12.
Appropriately you will arrive in Irkutsk at one of the grandest stations on the whole railway, since the city was known as the ‘Paris of Siberia’. It still has many Neo-classical and wooden buildings, some of them decorated with fantastically ornate fretwork, which are seen on the city tour. This also takes in the bustling market hall and the open-air ethnographic museum Life and Work in the Time of the Tsars. 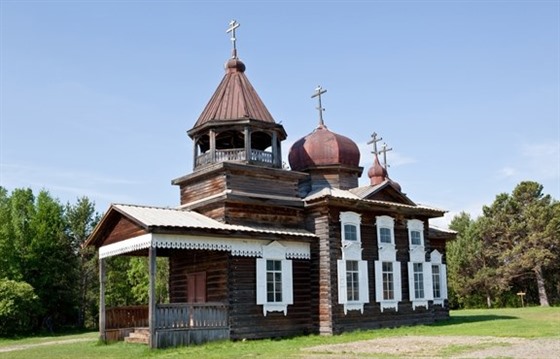 Famous Lake Baikal is a highlight for many passengers. This vast expanse is the world’s largest freshwater lake, the deepest, reaching depths of more than 1,600m (5,249ft), and thought to be the oldest, formed 25 million years ago. It is home to 1,700 species of plants and animals, two-thirds of them unique to Baikal. Besides a visit to an open-air museum of traditional wooden houses and a boat trip across the lake, there is an excursion over the heritage Circumbaikal railway, which is unrivalled in Russia for the density of engineering structures as well as spectacular views over the lake. 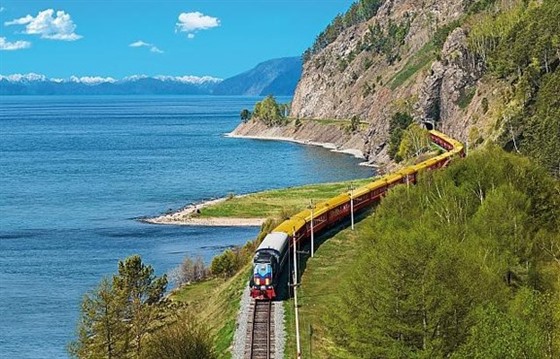 In the Buryat capital of Ulan Ude, you can see the world’s largest statue of Lenin and the 18th-century cathedral during the city tour. 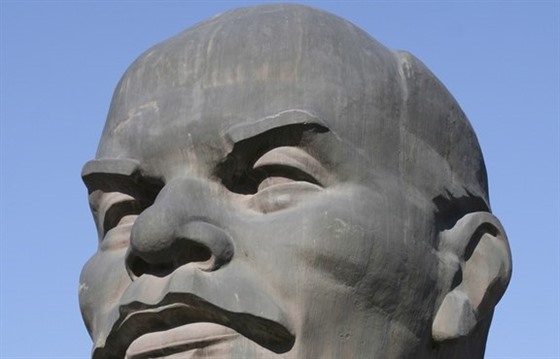 Monument to Lenin in Ulan Ude

The last stop before Beijing is at the mountain-ringed Mongolian capital of Ulaanbaatar, where lunch is taken with nomadic herdsmen on the steppe followed by a display of horsemanship. 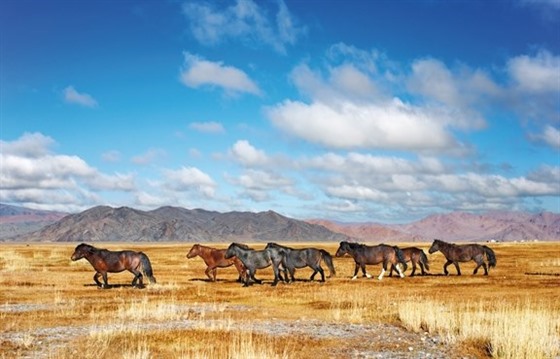 Crossing Mongolia on the Tsar’s Gold

Rolling grassland makes up much of the crossing of the Gobi Desert for the final part of the journey to the Chinese capital for two days of tours, including an excursion to the incredible Great Wall.