Along the banks of the Moskva River you’ll find Novodevichy Park, a quiet and peaceful place away from the hustle and bustle of Moscow city centre. Across the lake, admire the Convent and Cemetery with its gold cupolas glistening in the sun.

The park is known for its Bronze Duck monument – a replica of that found in Boston Central Park. The bronze ducklings and mother duck are the characters of a story – Make Way for Ducklings – written and illustrated in 1941 by Robert McCloskey. It tells the tale of 8 ducklings raised by Mr and Mrs Mallard – Mrs Mallard takes her ducklings to a nearby pond but has to cross a busy road. A Policeman called Michael stops the traffic allowing them to cross. 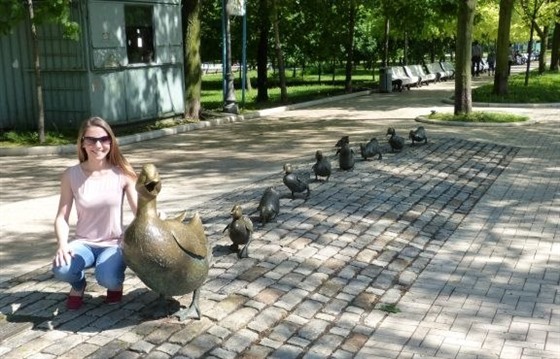 The duck family came to be in Moscow as a result of a gift from the first lady of the US, Barbara Bush. When Russian President Mikhail Gorbachev and his wife visited the US, Mrs Gorbachev fell in love with duck family whilst walking in Boston Central Park.  Mocsow’s replica was given to Russia as part of the Strategic Arms Reduction Treaty and placed in Novodevichy Park in 1991. An unexpected highlight of my Moscow city tour!