The Road to Tbilisi

The Road to Tbilisi

During the not-so-distant twilight years of the Soviet Union, when footnote leaders such as Andropov and Chernenko ruled the Union, foreign visitors often arrived in the Southern Caucasus by road; departing the North Ossetian capital of Vladikavkaz for Tbilisi on a potholed strip of tarmac that snaked its way up into the glorious snow-capped mountains of the Caucasus, towards Georgia, the fabled land of the Golden Fleece. The Intourist driver, with years of experience under his belt, would endure a full body workout as he wrestled with the heavy steering wheel and threatening gearstick of his Ikarus bus, the spluttering diesel engine spewing noxious fumes and grumbling as it crunched from one low gear to another, being willed onwards and upwards as it laboriously trundled towards the watershed of not just the Caucasus, but Europe and Asia. 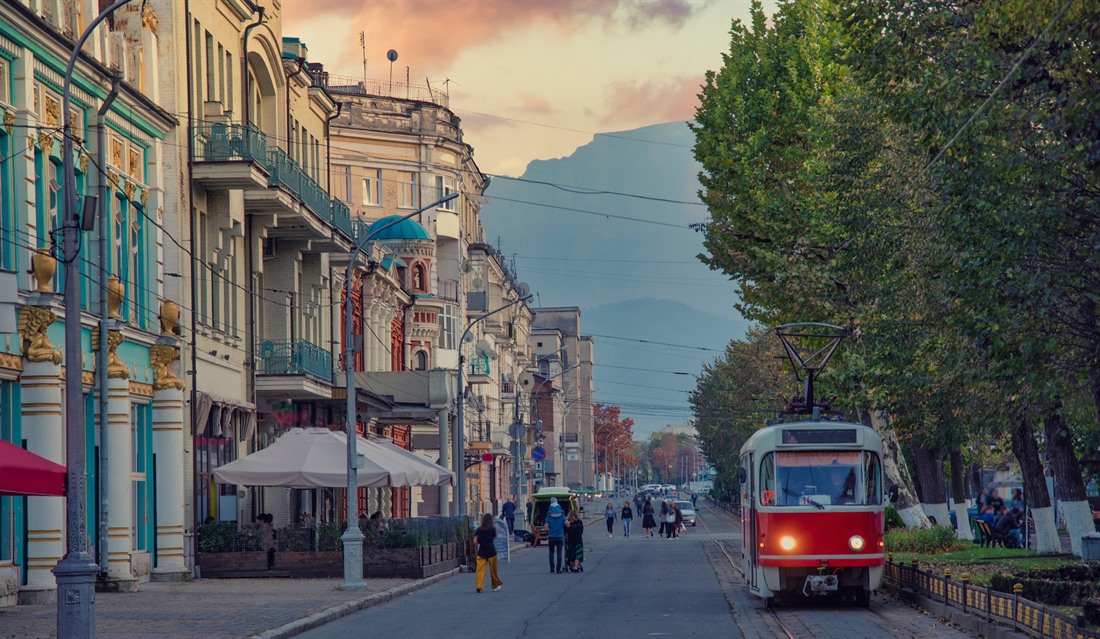 Despite the ‘Georgian Military Highway’ being the proprietor of a rather ominous name, this route to Tbilisi is one which has been used for millennia; its modern name stems from the Russian Empire’s halcyon days, when successive emperors spent a fortune (and decades), developing this track into a core artery for facilitating Russia’s expansion into and control over these newly acquired southern territories. It was not just soldiers that traipsed into the Caucasus; Pushkin, Tolstoy, Lermontov, Chekhov – many stalwarts of Russian literature made this journey too, in a quest for adventure and inspiration, the latter succinctly proclaiming that this road, ‘isn’t a highway, but poetry.’ The somewhat less loquacious Intourist drivers of yesteryear would largely just grumble under their breath while they tussled with the bus and focused on the unforgiving road ahead, but they would occasionally display flashes of pleasure in their eyes, although it wasn’t clear if this was down to the enthralling scenery unfurling before them, or the thoughts of a cigarette and pit stop at the Jvari Pass, the 2,400 metre highpoint of the road. Perhaps a warm bed was waiting somewhere below, down in Tbilisi. 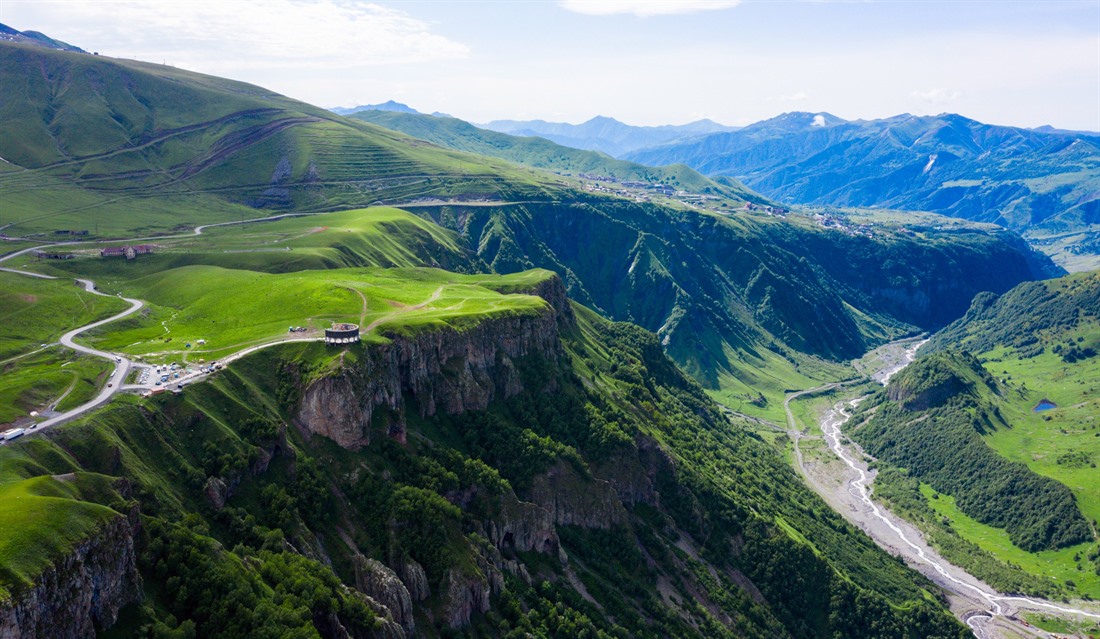 Entering Asia with little fanfare, the fertile adret slopes and dominating 5,000 metre peak of Mount Kazbegi transfixed newcomers to the region, as it has time immemorial. The local tour guide, standing precariously near the front of the bus and clinging to anything within her grasp to steady herself, would deliver a lacklustre and erring on the robotic Sovietised monologue on the region and events of the day. While half her mind was charged with spouting droll facts and figures, such as the amount of copper which will be used in the forthcoming construction of the Zhinvali Dam, her true focus was on the road, as both she and the driver would be on the lookout for roadside babushkas selling honey or coveted homemade Chacha, a particularly lethal pomace brandy.

Once beyond the then obligatory and now forlorn Russia-Georgia Friendship Monument, the road further south slowly became less taxing. The drivers could ever so slightly relax and the roadside babushkas selling honey and Chacha would slowly be replaced by slightly less weather-beaten souls selling homemade wine dispensed into whatever glass or plastic container was at hand. As the snow-capped mountains would fade from view the landscapes would green and soften, rocky outcrops occasionally being interrupted with diminutive churches and crumbling fortresses, reminding the traveller of Georgia’s long history as both a proud Christian nation and prized jewel sitting atop a geostrategic crossroad. 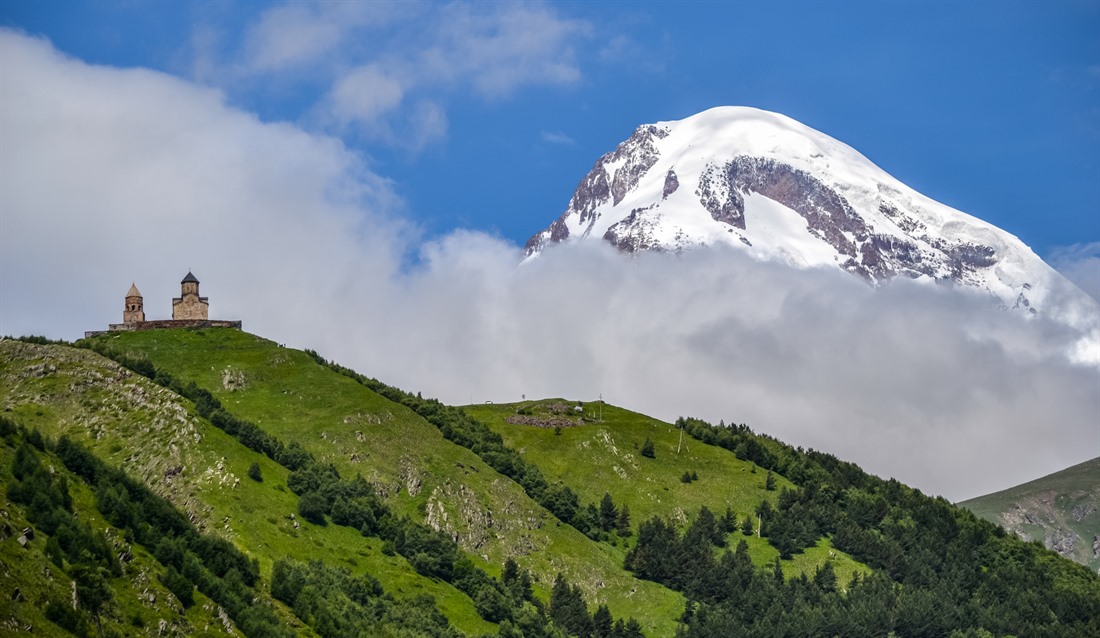 On arrival in languorous Mtskheta, home of the Georgian Orthodox Church, the subject of religion would arise, but sticking to a well-versed line, the importance and significance of faith would largely be brushed over by these guides of the old guard, the rapid resurgence of Christianity would not come for a few more years. Still, one would visit the impressive Svetitskhoveli Cathedral, before graunching onwards for the last stretch of the journey. Finally, after 212km on the road, one would lurch into Tbilisi, passing a striking statue of Lenin in Erivansky Square and overtaking the trundling trolleybuses on Rustaveli Avenue before pulling into the forecourt of the Iveria Hotel, a hotel not altogether different to the previous night’s, back in Vladikavkaz. Suitcases unloaded and dusted off, the tired driver could rest up, enjoy another cigarette or two and sample some of his chacha before clocking off for the day and disappearing into the night. 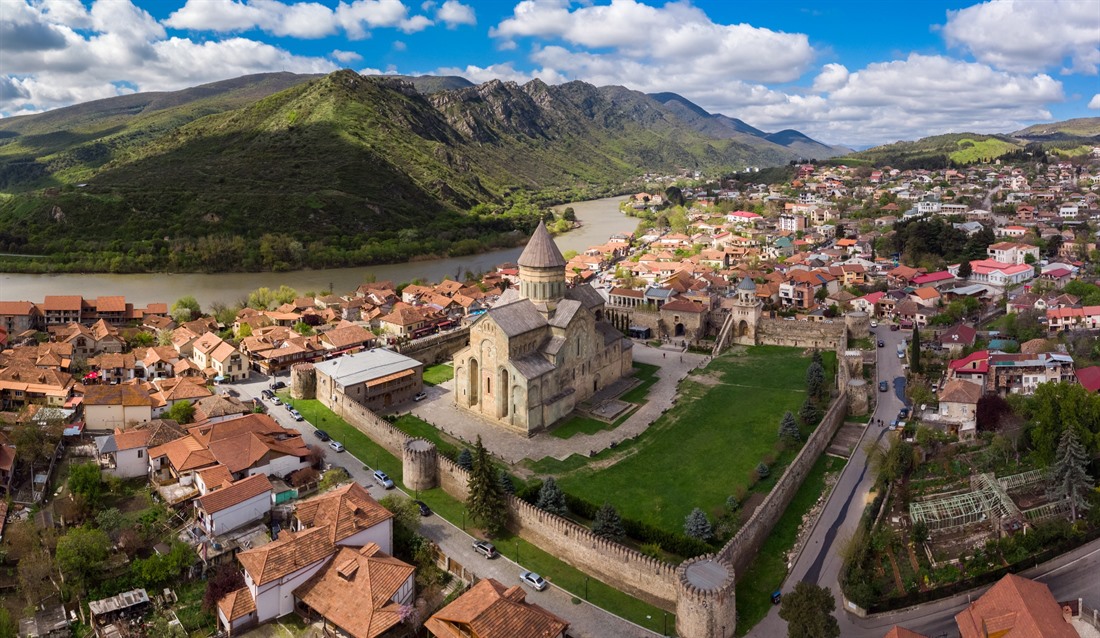 Fast forward a few decades, and while in some regards this wonderful journey is unchanged, in others the scene has transformed beyond recognition. Of the three roads and one railway that linked Russia and Georgia in these bygone Soviet days, only the Georgian Military Highway survives as a viable direct lifeline between the two –the other routes have been cut in half by the separatist republics of Abkhazia and South Ossetia. Few tourists visited Georgia during the largely chaotic 1990s, when violence and disorder swept through the nation; it was only really after the Rose Revolution of 2003, when Shevardnadze was forced to resign, that Georgia started to truly find its feet as an independent nation.

By 2003 Tbilisi’s statue of Lenin was long gone, but Stalin’s statue in Gori was enjoying a stay of execution and the old flagship Iveria Hotel had been occupied for over ten years by hundreds of non-paying ‘guests’ - refugees from Abkhazia who ‘checked in’ during the early 1990s and never left. Stalin, well, his statue at least, was eventually purged in the dead of night as an emboldened Georgia began to look west, to Europe, for an ally. But just as a rose has thorns, so too did the Rose Revolution. Just as Georgia was beginning to bloom in the early 21st century relations with Russia soured; complex issues with Moscow over Abkhazia and South Ossetia caused more hardship, rising to boiling point with the 12-day Russo-Georgian War in 2008. The Georgian Military Highway closed, and Georgia was now completely cut off from its vast northern neighbour. 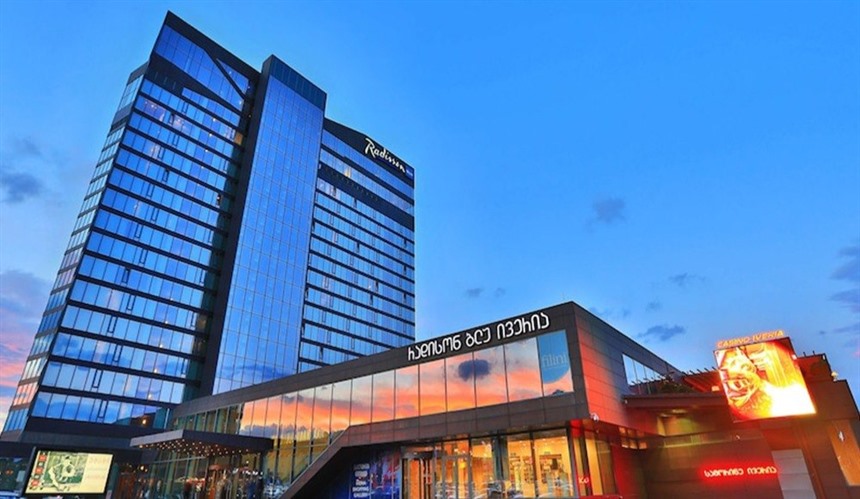 By 2013 Georgia was now sitting firmly in the pro-European camp, but relations with Russia had improved enough for the Military Highway to quietly reopen. The Soviet Era, 1990s and Civil Wars of those days slowly become distant memories, although the Abkhazian and South Ossetian issue is a constant reminder that unresolved issues remain and trouble could return with little or no notice, just as it did in 2020 in Nagorno Karabakh. Since 2013 Georgia has truly bloomed – a new generation has risen up and the country, despite struggling for over 20 years, is now standing proud and striding forward. Has there ever been a better time to visit? Probably not since the days of Chekhov and his contemporaries. 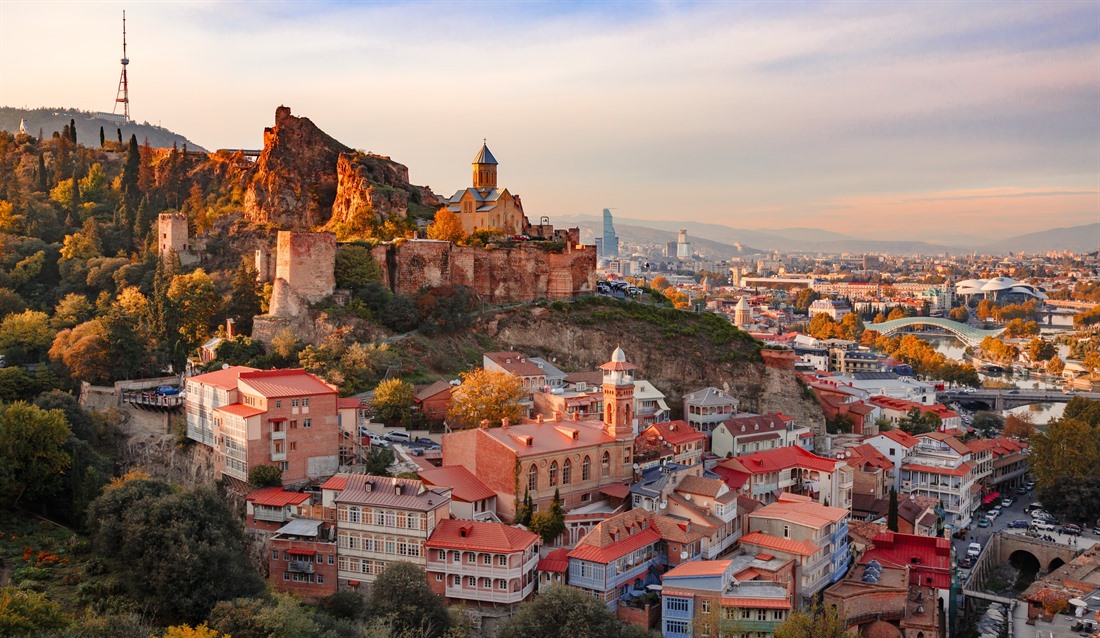 Today, Tbilisi bustles with vibrance and positivity and our bus driver, stubbing out his second cigarette of the morning, greets our group with some limited English and a warm, honest smile. He steps into his sleek air-conditioned Mercedes Bus and slides into his heated driver’s seat. Our tour of Georgia is coming to an end – Russia beckons. Taking out his iPhone he starts his sat-nav app and instructs it to set course for Vladikavkaz, a force of habit, as there is only one route and he knows it like the back of his hand. The Iveria Hotel, now a glitzy Radisson Blu, hides its secrets well, with guests rarely aware of what this hotel has lived through over the decades. If only these walls could talk. The suave concierge and dapper bellboys help load and stow the cases, waving us off as our bus rolls out into the oft-gridlocked morning streets of central Tbilisi. The trolleybuses of yesteryear are long gone.

A Georgian orthodox cross hangs from the bus’ rear-view mirror and, if we stop once more in Mtskehta for a few final photographs, the guide and driver will almost certainly pray and lightly extol to us once more the virtues of Christianity – such is the resurgence of the old faith in the new Georgia. While the size of the potholes on the road changes from one fiscal year and government to the next, not a great deal has changed on the Military Highway itself, and the driver, aided by power steering and modern engineering, barely breaks a sweat as we climb back up towards the Jvari Pass. A new generation of roadside babuskhas, just as weathered as the last, has risen through the ranks, still selling their honey, chacha and wine to the passing traveller, still displaying a gold-toothed smile, just as their mothers had had. Some things never change. Russia lies ahead, the North Caucasus beckons, but that is another story altogether.

7 place to visit while you're in Armenia