Regent Russia Travel Specialist, Christina Gibbons, shares her experiences as she returns from her first visit to Kaliningrad, Russia. If you missed it, read Part 1 of her trip here. 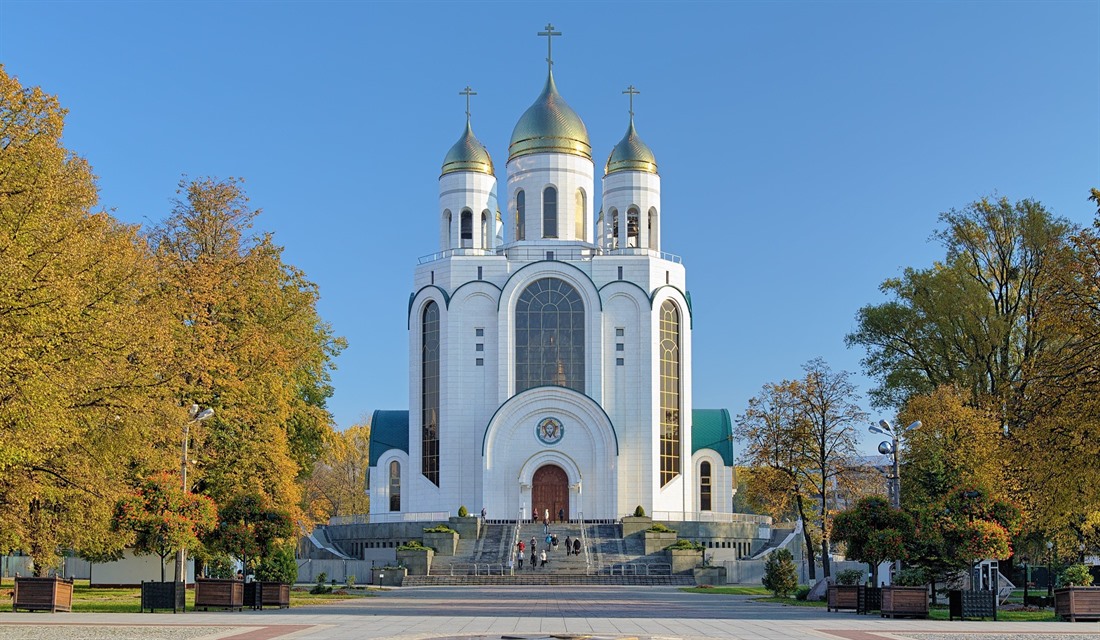 As a deliberate sign of independence from Mother Russia, the gleaming new Orthodox cathedral stands in a prime location on a manmade hillock in the very centre of the city. What makes it so different from all other orthodox cathedrals are the enormous windows which, apart from letting in light (rarely found in Orthodox places of worship), gives the faithful a panoramic view of the sky. Next to the cathedral is a rather kitsch wedding chapel on top of which are two enormous, intertwined golden rings.

During the excavations of the cathedral's foundations, there was the morbid find of a mass grave of Napoleon’s retreating troops. What to do with all these bones? France doesn’t want them as many might be mercenaries rather than true French soldiers. Unceremoniously they have been bundled up in black bags and dispatched to Moscow. Below the cathedral is the vast Victory Square, a common site in Soviet cities. The square has been softened with fountains, trees and plants. Around the square are a good choice of cafes/bars and restaurants as well as the, now obligatory, shopping mall. Shopping malls are springing up all over the city and there seems to be no lack of punters. 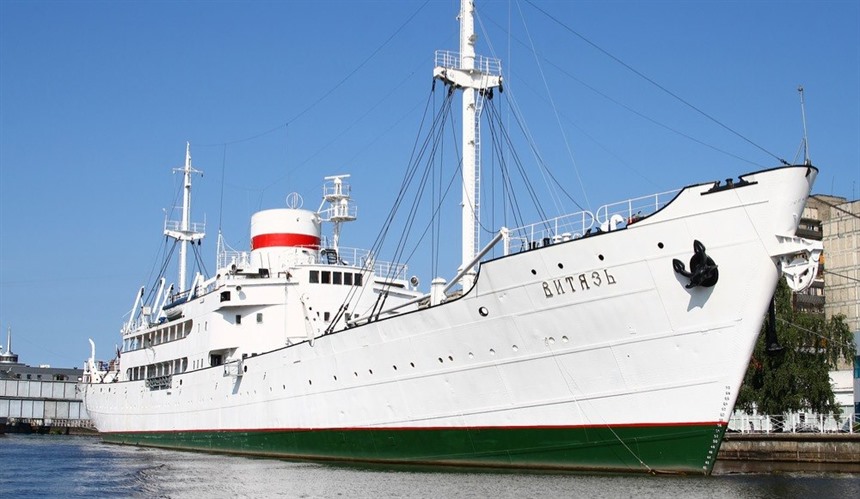 The German influence can also be found in the number of Bavarian bars and restaurants as well as the growing number of central Asian style restaurants reflecting the ever-increasing influx of economic refugees from this part of the ex-Soviet Union. Eighty percent of the population are Russian. Amongst the remaining 20% there are 117 other nationalities. Religious tolerance seems to be the norm, although a newly built mosque has had to be pulled down because the ‘right papers’ had not been obtained. The Jewish community will soon have a new synagogue and centre.

A quirky site of interest would be a visit to a former Soviet research vessel, the Vityaz, and an old Foxtrot class Soviet submarine both housed at the World Ocean Museum.

Once a closed area due to being the base of the Russian Baltic fleet, the Zamland Peninsula is now open for business. There was a surprising lack of security, given that it is still a naval dockyard. Nobody wanted to see our permit. It felt good to stand on the most westerly point of Russia, looking towards the grey seas of the Baltic. Nearby is a reminder of the strategic importance of this piece of land with the international mass graves. In reality the majority of names on the marble slabs are German and work is still in progress to identify all the remains. Although a sobering thought at the futile waste of so many young lives the cemetery has been sympathetically laid out with equal respect to all nationalities. As a reminder that this peninsula was not only crucial for the Germans and Russians there remains the ruins of a citadel, built by the Swedish king, Gustav Adolf von Schweden, during Sweden’s brief occupation. 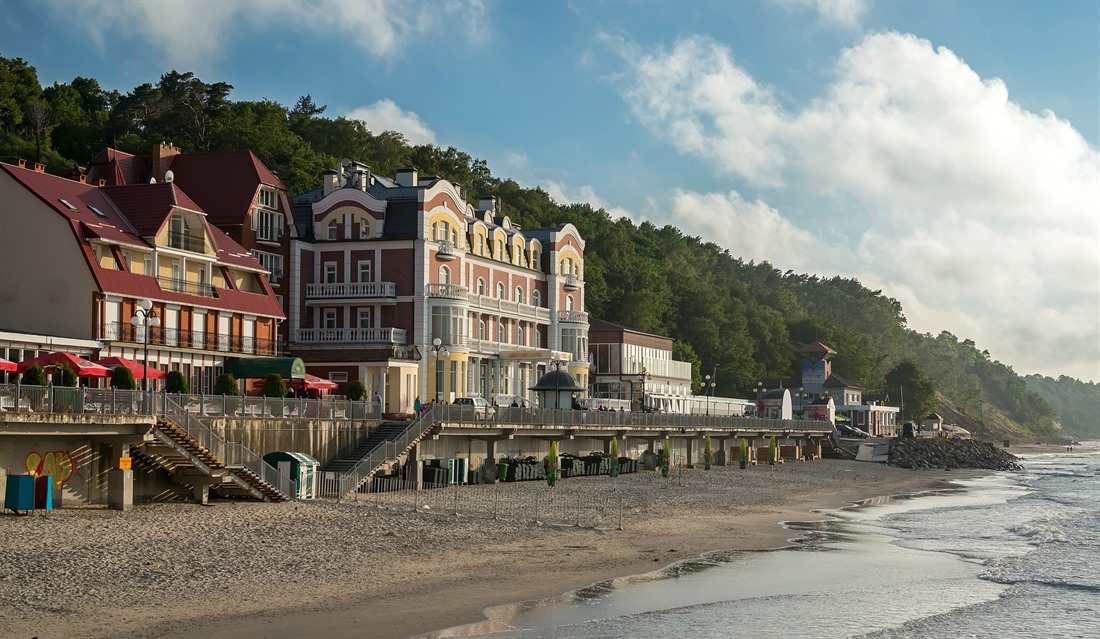 From Baltiysk it is a short hop to the very popular resort of Svetlogorsk [formerly Rauschen] Obviously this town was fashionable with German tourists long before the Soviet invasion. There are many examples of Bavarian looking houses, which look ripe for conversion into ‘boutique’ hotels. Tourists from the motherland flock to Svetlogorsk in the summer but the traffic is one way. There are many citizens of Kaliningrad who have never visited mainland Russia, preferring shopping sprees to neighbouring Poland and Lithuania.

You cannot travel to Kaliningrad without a visit to the unique landscape of the Curonian Spit with its disappearing sand dunes and acres of pine forests. Amongst the pines is the ‘dancing’ forest with strangely deformed trees. So many theories abound as to the cause of these distorted trunks from genetic modification to UFO’s. Split almost 50/50 with Lithuania the 98 km long spit lies on a major migration route for birds, who, of course, do not recognise land borders. On the Russian side is the oldest bird ringing station in the world [established in 1917]. A Russian crocodile Dundee character, who has been ringing birds for 45 years, explained the rather untechnical methods of recording and ringing with the assistance of a very angry small bird halted on his way from southern Africa to northern Europe. A few of his explanations seemed rather exaggerated, but there was no denying his enthusiasm. 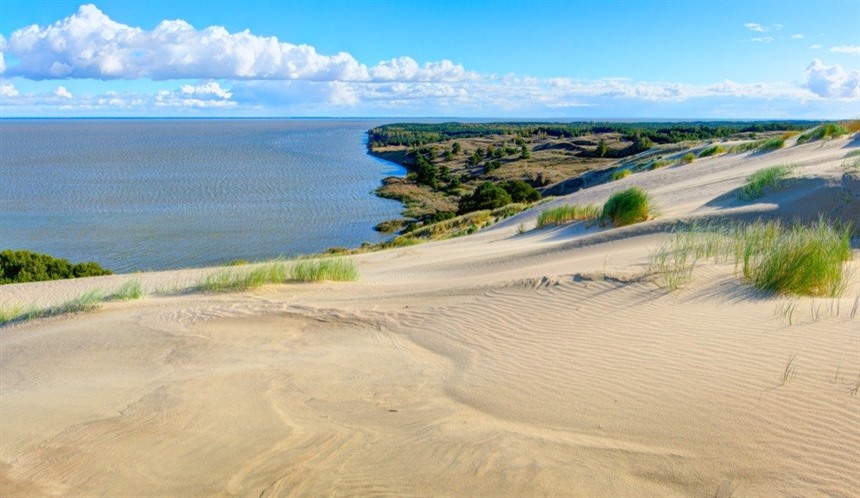 Kaliningrad is an anomaly – part of Russia but not Russian, nor European. The standard of living seems good although the average salary is much less than in Western Europe; the atmosphere is relaxed and optimistic. A young, well-educated population is inspiring, but who knows in the future who will rule this enclave.