The greatest show on the earth... is in the sky

I first fell in love with the Northern Lights when watching the animated film, The Snowman, as a small child. In the scene where the group of snowmen are dancing around under a brightly lit, multi-coloured sky, it seemed at the time far easier to comprehend the notion of snowmen throwing a party than to imagine that those dazzling lights could in reality be naturally cast upon the earth from above. Fast forward over 20 years, and the desire to see the Aurora hasn’t merely been on my wishlist; it has long been at the very top of the list of things I want to see before I die. Finally, after so many years of wishing, I saw the Northern Lights here in Iceland tonight. 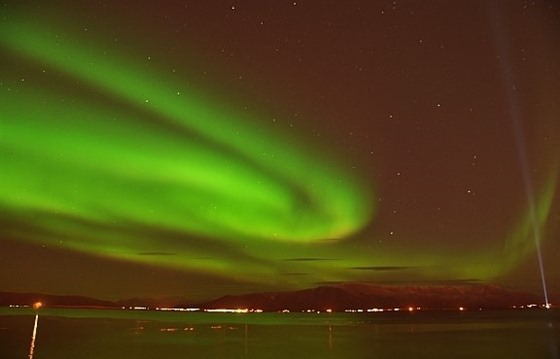 Walking back to my Reykjavik hotel after dinner at around 22:30 local time, the Lights first appeared as a white, cloud-like formation in the sky. They then formed an arc, turning green (with the occasional drop of red), and started dancing in the sky. Moving from the West horizon to the North, they expanded to cover a vast swathe of sky, whilst progressively becoming brighter. Happening as it did on the last night of my escorted Iceland Complete tour around the island, I was with three other people, and we hastily jogged down to the waterfront area where we could escape the annoying glare of the street lights. Finding a good dark spot, we sat on grass close to the water´s edge and sat in blissful insignificance as the Aurora arched across the sky. At this point, what was a personally very momentous occasion became slightly emotional, but as I felt the tears welling up, I just felt extremely grateful and privileged that I had finally seen the Northern Lights.

The Lights capped what had been an incredible tour from start to finish, full of many highlights which included glacial lagoons, volcanic craters, geothermal pools and epic waterfalls, amongst many other breathtaking sights. It has simply reaffirmed my belief that Iceland is the most beautiful country on earth, and although my trip is nearing its conclusion, it will be difficult not to leave my heart behind when I go. Next time you’re in Iceland and it’s a cold, clear night, take the time to check the sky. You never know, you could be lucky – and if you are, it will be the best feeling ever.